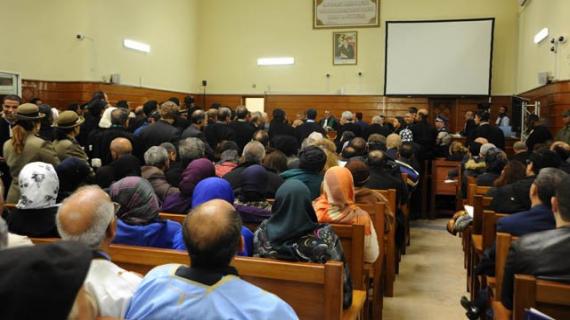 On Thursday, the public prosecutor's office delivered new evidence to the criminal chamber at Salé's appeal court confirming the preliminary planning by many of the accused in the Gdim Izik events, in coordination with foreign parties, of the camp installation.

This evidence consists of recordings of telephone conversations between some defendants and leaders of the "Polisario Front" that were carried out before the camp’s events in 2010, under the supervision of the public prosecutor's office in Laayoune, the prosecution said.

These recording contain information and instructions that the accused received from foreign parties on how to set up the camp, to manage it, to supervise it, to communicate with local authorities and to raise the scope of the social demands that were at the origin of the installation of the camp, with the aim of not reaching an agreement with the authorities.

Presented to the Court in the form of minutes, these conversations also consist of an agreement between the detainee Naama Asfari and leaders of the "Polisario Front" on the use of violence and resistance while maintaining the installation of the camp.

The suspects’ defense asked the Court not to take these recordings into account, considering that they had no connection with the charges against the defendants and that they are no longer useful as the accused decided to withdraw from the trial.

For their part, the civil party’s defense considered that these recordings constitute an important evidence in this case on which it will rely in its pleadings, calling for them to be attached to the case.

The Court decided to present these documents to the defense of the two parties to examine them and issue their opinions, while instructing the registrar to inform the accused of these telephone recordings. The suspects were tried for the first time before a military court in Feb. 2013 and were handed sentences ranging from 2 years imprisonment to a life sentence on the charges of forming criminal gangs and using violence against law enforcement officers leading to their premeditated death, body mutilation and aiding and abetting.

Following the Moroccan military judiciary reform (July 2015) and under which civilians could no longer stand trials in military courts, the cassation court decided to refer this case to a civil court for suspects' re-trial. The Gdim Izik events left 11 killed and 70 wounded among the security forces, as well as 4 injured among civilians.