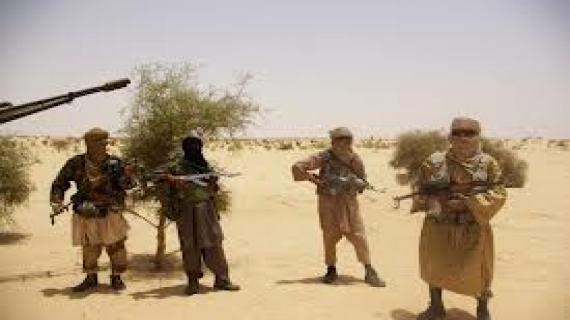 Warned the new version published by the group think the American Carnegie Endowment For International Peace, under the title "deserts risky: the instability of the desert", organized by the (al-Qaeda in the Islamic Maghreb), who succeeded in penetrating in the Sahel and Sahara, which has become "an area of instability" , which became the extremist group based on "base and recruits fighters."

The most prominent version, which is the signing of Frederic and Eriy and Anwar Bokhars, experts on issues of the North African region, engaging large-scale organization of Al-Qaeda and its allies in terrorist activities and smuggling in all its forms in the Sahel and Sahara, including Libya, Mali, Mauritania and camps in Tindouf, southwest Algeria, which been described ticking bomb explosive at any moment.

The authors of this book, which will be presented officially next week in Washington, in the context of a meeting attended by a number of experts, that "while focusing the attention of the international community to the serious events that have rocked Tunisia, Egypt and Libya in the context of the Arab Spring, has seen the region shifts had its effects Large regional security. "

They added that although "ignored" by the decision-makers and opinion, the countries of the Sahel and Sahara led "bill mismanagement and governance poor, corruption and endemic poverty in the context of ethnic divisions and social development, which make way for the spread of transnational crime and Islamic extremism."

Noted the version that the terrorist attacks, especially those targeting the U.S. ambassador to Libya, Chris Stevens, and military intervention French in Mali, then the hostage complex oil eye Amnas southern Algeria, emphasizes "the emergence of a new front against al-Qaeda, which had been described by some arc of instability geographically covers an area stretching from the desert to Somalia across North Africa and up to Sinai. "

The version that al-Qaeda in North Africa "benefit from the frustration and resentment experienced by youth camps in Tindouf, as well as Mali, Libya, Niger, Mauritania and Algeria," adding that it concerns one of the factors that undermine the stability and security in the region.

In a chapter on the Sahara issue, he stressed Anwar Bokhars that "failure to resolve this conflict will have a negative impact on security in the region, especially in the Tindouf camps, which have become fertile ground for the promotion and smuggling of drugs and weapons."

He pointed out that "there are signs of a compelling and collusion serious between criminal organizations and al-Qaeda and the Tindouf camps", recalling that "the Minister of Foreign Affairs Financial had confirmed in February, and the presence of elements of the Polisario within terrorist groups who fled the French army in Mali" .

The release concluded that "fragile states that are on the brink of bankruptcy constitutes a threat to international security, they can become training camps and rear bases for al-Qaeda and terrorist groups loyal to him."

Translated By: Polisario: Threat on the desert