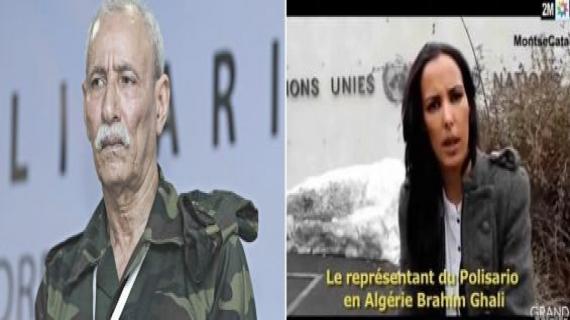 Khadijatou Mahmoud Zoubeir, a Sahraoui woman who was brave enough to reveal the identity of her presumed rapist. She preferred to «break the omerta» and speak in a documentary broadcasted on 2M about Brahim Ghali, head of the Polisario front and alleged rapist.

In 2010, Sahraoui translator Khadijatou Mahmoud Zoubeir, went through one of the ugliest experiences in her life. She claims having been sexually assaulted and raped by the head of the separatist Front, Brahim Ghali. Khadijatou who spoke about the incident in a documentary broadcasted on 2M, declares that after visiting the Polisario’s «embassy» in Algeria to retrieve a visa that she was granted through an Italian NGO, she met Ghali who raped her in his office.

After finding refuge in Sevilla, Spain, Khadijatou was there to testify publically identifying her alleged aggressor. According to her testimony in «Grand Angle», a documentary produced by 2M, the victim delivered details concerning the day of the incident. «Brahim Ghali, who represented the Polisario in Algiers met me after official hours», Khadijatou recalls.

«I was invited by an Italian organization called 'Sahara Marathon', which helped me get my visa (…) When I arrived, the embassy guard told me that my appointment was scheduled for 7 pm», the young woman added, «I then introduced myself and sat down we exchanged greetings. He raped me what happened, happened».

In 2013, Khadijatou filed a complaint in Spain against Brahim Ghali. Three years later after becoming the president of the Polisario front, Ghali was not able to enter the Spanish territory where he is registered as wanted. Eventually in November 2016, the presumed rapist could not attend a pro-Polisario conference that was organized in Barcelona.

After testifying in 2013 before the Human Rights Council, Khadijatou now «encourages the girls in the camps to break the omerta». Her story as narrated by the documentary was accompanied by different other people who were victims of the separatist regime.

Others have tried to break the omerta, and speak about what they went through inside the camps of the Polisario front, namely Dahi Aguay who was kidnapped for 6 yearsn, Mohamed Mouloud Echouiaar that got imprisoned for 13 years in terrible conditions, Mohammed Lkabch 12 years detained without a trial and Mohamed Vall Ould Ghadi a Mauritanian man tortured and jailed for 4 years.