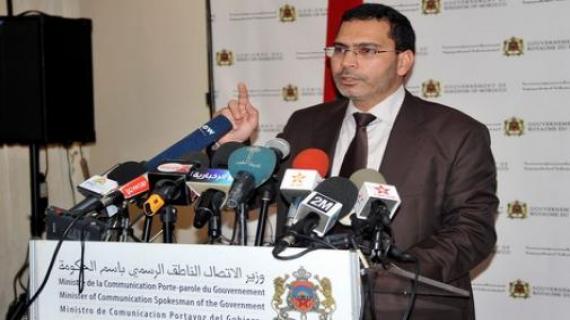 Morocco's recall of its ambassador in Algiers for consultations is an appropriate, clear decision over the hostile position of Algeria against Morocco, mainly about the Sahara issue, communication minister, Govt. spokesperson Mustapha El Khalfi said Thursday in Rabat.

Speaking at a press briefing after the weekly cabinet meeting, El Khalfi said that Morocco was not going to turn a blind eye on the unprecedented escalation in Algeria's hostile position against a vital national cause, namely the Moroccan Sahara issue.

Recalling the message sent on October 28 by Algerian president to a conference in Abuja, El Khalfi said that this is not a gesture by a human rights organization or body but a letter sent by the highest authority in Algeria.

This message contains accusations on several matters related to human rights, a fact that Morocco cannot overlook, he added.

He underlined that the Kingdom took this decision to defend its choices concerning the national issue, adding that this not a matter of monitoring human rights or broadening the MINURSO mandate, but rather an escalation against Morocco.

The official said that any decision taken in this regard will be announced at the right time, adding that Morocco launched a communication campaign to shed light on its position. He also said that a meeting will be scheduled with political parties to explain Morocco's stance.