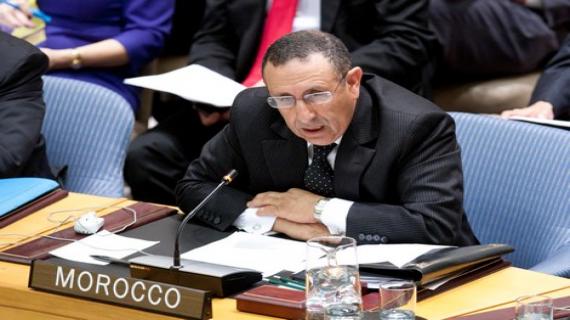 Morocco welcomes the unanimous adoption of resolution 2099 of the Security council that shows that “it is the voice of wisdom that prevailed”, said here on Thursday minister delegate for foreign affairs and cooperation, Youssef Amrani.

“The adoption of this resolution text confirms the relevance of the consensus-based approach adopted by the Security Council and the Sahara friends groups to encourage a political solution, based on reality and compromise”, the minister-delegate told MAP.

“The final wording of this resolution is the fruit and the crowning of the decisive impetus given by HM King Mohammed VI who has always been personally and fully involved for the preservation and defense of the nation’s supreme interests,” he added.

The official further stressed that the sovereign’s leading action consisted in several aspects, including a large mobilization of all the country’s live forces to reaffirm the national unanimity enjoyed by the Sahara issue, in addition to proactive and specific contacts with international influential actors, direct contacts and visits of top delegations to several member states of the Security Council.

Amrani also welcomes the resolution as a text that reiterated the pre-eminence of the Moroccan proposal to grant large autonomy to the Sahara, a former Spanish colony retrieved by Morocco in 1975.

It also insisted the importance of negotiation “in good will as the only means to reach a solution, on the basis of realism and compromise”.

The text further recognizes “the scope and importance of HM the King’s bold decisions and measures to promote and protect human rights as well the Kingdom’s interaction with the special procedures of the UN human rights council.

This is a real token of the member-states’ confidence in Moroccan human rights institutions, said the Foreign minister-delegate and shows that nothing justifies any modification of the MINURSO mandate to encompass human rights monitoring.

Amrani also pointed out that the resolution renews the call for a population census in the Tindouf camps, stronghold of the Polisario in southwestern Algeria, and encourage Algeria to maintain dialogue with the HCR to this end.

The resolution also underlines the importance of cooperation between the Arab Maghreb Union (Algeria, Libya, Mauritania, Morocco and Tunisia) in order to end the present deadlock in the Sahara issue and move forward to a political solution.