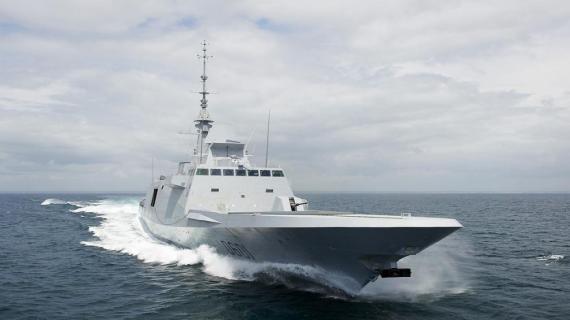 The crew and DCNS specialists completed the latest trials off the Brittany coast. This series of tests was designed to check the performance of the combat system’s main sensors.

Operational scenarios were executed to check the consistency of the data analysed and displayed by the combat system sensors with the results obtained during shore-based simulations. Specific tests included target engagement sequences using Aster anti-air missiles and MM40 anti-ship missiles, fire control tests for the 76-mm main gun and exhaustive testing of the multifunction radar. Other vessel capability tests involved helicopter approach control and the deployment of various towed devices.

“This third series of sea trials represents a major milestone for the overall programme and more particularly for the ship’s combat system. Our crews thoroughly tested the full suite of combat system hardware and software that makes FREMM frigates among the most versatile and advanced on the world market”, says Gilles Raybaud, DCNS’s FREMM programme manager for Morocco.

To acquaint them with shipboard operations, members of the crew that will take over once the vessel enters service with the Royal Moroccan Navy participated in the trials. Working in tandem with the French Navy crew, they took part in activities ranging from bridge and propulsion watchkeeping to safety exercises and platform management. The Moroccan crew members had previously completed simulation-based training at DCNS’s Lorient and Le Mourillon centres to familiarise them with the FREMM platform management systems.

Vice-Admiral Laghmari, inspector-general of the Royal Moroccan Navy, toured the future Mohamed VI FREMM at Lorient, meeting members of the Moroccan crew assigned to the trials and congratulating them on the tasks already completed. He encouraged them to continue to familiarise themselves with the new ship prior to delivery, and indicated that he was fully satisfied with the programme’s progress and the results of the sea trials.

The first series of sea trials, conducted in April, demonstrated the full compliance of the ship’s propulsion and navigation systems with the relevant performance requirements.

FREMM, a major programme for DCNS and partners

The French FREMM programme calls for 12 ships – 11 for the French Navy and one for the Royal Moroccan Navy.

DCNS delivered the Aquitaine, the first FREMM multimission frigate, to the French Navy in November 2012.

In accordance the contractual provisions, the second-of-type is scheduled for delivery to the Royal Moroccan Navy by the end of this year. The ship will be named the Mohammed VI.

DCNS is currently working on four FREMM frigates at different stages of completion:

the fifth and sixth of type are at earlier stages of construction.