Royal speech to the nation on 37th anniversary of Green March 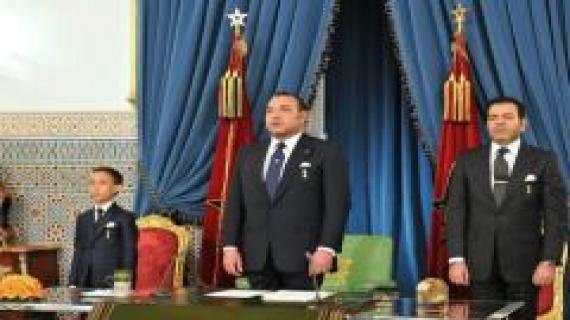 King Mohammed VI delivered, on Tuesday, a speech to the nation on the thirty-seventh anniversary of the glorious Green March.

Below is the full text of the speech:

Praise be to God

May peace and blessings be upon the Prophet, His Kith and Kin

Today we are proudly celebrating the thirty-seventh anniversary of the glorious Green March, an epic national event which reflected the civilized approach chosen by Morocco to recover its Sahara. In addition to that, this truly historic achievement has provided an invaluable source of inspiration, nurturing the lofty patriotic values underpinning the symbiosis between the throne and the people, as well as the nation’s unanimous, unwavering commitment to its sacred values.

True to the eternal oath of the Green March, we have resolutely and confidently pursued our efforts in order to further expand and strengthen the national model the Moroccan people have chosen for themselves.

With God’s blessing, and thanks to strong determination and a keen sense of responsibility, our country has achieved a great deal through the far-reaching political and institutional reforms introduced, the major projects launched, and the ambitious initiatives undertaken to promote social cohesion and offer our citizens a free, dignified life, in response to their legitimate aspirations.

This is the right approach unanimously agreed upon by the Moroccan people through their active involvement in the reform process I have spearheaded. They have thus illustrated their great confidence in their national institutions and in the nation’s strategic policies. As a result, extensive reforms have been introduced and there have been major accomplishments, such as the democratic transfer of power, since 1997, between the ruling coalition and the opposition. This not only attests to normal political practice in the country and to the nation’s dynamism, but it also shows our citizens and our partners – whether they are states or blocs – that we have a clear, future-oriented vision.

In this regard, I call upon stakeholders and officials in all institutions to be worthy of the trust placed in them. In addition to the executive and judicial branches, I call upon elected institutions, at all levels, to comply fully and at all times with the new concept of authority. Elected officials must serve the citizens and be worthy of their trust, avoiding any personal or narrow-minded considerations.

The tabling of the pertinent initiative designed to give the Moroccan Sahara autonomous status within the framework of the Kingdom’s sovereignty, national unity and territorial integrity was a watershed in the search for a final settlement to this regional artificial dispute, all the more so as the initiative is consistent with international legitimacy, grants all the  region’s populations extensive management of their local affairs and respects the said populations’ specific cultural features.

Yet, because of the other parties’ lack of goodwill and persistent obstructionist schemes and maneuvers, the momentum created by this bold initiative through the fresh round of negotiations it triggered has not, so far, led to the desired final and mutually acceptable political solution.

These desperate attempts notwithstanding, Morocco confirms its keen desire to carry on with the negotiations on the basis of the criteria and objectives defined by the Security Council, and which have been confirmed to me by His Excellency Mr. Ban Ki-moon, the UN Secretary-General.

With this mind, Morocco stresses the need to comply with the criteria that ought to be observed when seeking a settlement, particularly the need to be realistic and to uphold the spirit of compromise. This is precisely the essence of the Moroccan autonomy initiative, which has been garnering growing international support.

Furthermore, I would like to remind you of the clear position recently stated by the UN Secretary-General, which stresses that in addition to pursuing the negotiating track, one of the missions of the United Nations Organization is to promote Moroccan-Algerian relations. Indeed, Morocco has been calling for the normalization of these relations, including the opening of borders, a request that has also been made by a number of countries and international organizations.

At the same time, Morocco calls upon the international community to endeavor to put an end to the suffering endured by our citizens in Tindouf, on Algerian soil, where some of the most hideous forms of repression, oppression, despair and deprivation prevail, in gross violation of the most basic human rights.

In this regard, we again call on the UN Refugee Agency (UNHCR), by virtue of its responsibilities in the area of ??protection, and because of Algeria’s international obligations as the host country, to register refugees and conduct a census of camp populations, in accordance with the Security Council resolutions adopted in 2011 and 2012.

The new Maghreb order I called for last year has today, more than ever, become an urgent necessity. It needs to be given concrete substance to turn it into a reality so that we may build a common Maghreb.

It is therefore imperative that the five Maghreb countries pledge to overcome the current state of inertia which puts the future of the Arab Maghreb Union at risk. This Union is already the least developed regional integration bloc in Africa.

It means we have to work earnestly and in good faith to develop mechanisms that are conducive to solidarity and integration in order to fulfill the aspirations of our peoples, enable them to achieve their full potential and put their skills and qualifications to good use, ensure the free movement of people, goods, services and capital, promote growth, create wealth and guarantee our collective security.

Morocco will continue to strengthen its relations with African sister nations, bilaterally as well as at regional level, notwithstanding the fact that some countries are still clinging to outdated positions based on inapplicable solutions, thereby disregarding the substantive developments witnessed in the question of the Moroccan Sahara – even adopting stances that are inconsistent with those developments.

As Morocco is firmly convinced of the justness of its cause and of the pertinence of its policy, and given its full awareness of its duties vis-à-vis the Saharan populations, it will not, under any circumstances, allow the fate of the Sahara to be determined by the other parties’ schemes and failed maneuvers. Therefore, we will forge ahead with the development and modernization process in our Sahara with even greater resolve and hard work.

In this respect, I wish to reiterate our commitment to implement advanced regionalization, making sure our southern provinces are given priority in this process. Indeed, there are vast opportunities for the participation of citizens in the management of local affairs, for their contribution to integrated, sustainable human development and for the mobilization of the populations concerned in order to produce new elites, especially among women and young people, in the framework of a transparent, democratic transfer of power.

Furthermore, I would like to commend the important and varied development projects launched in numerous sectors for the benefit of the region’s inhabitants. These projects must be further enhanced, and fresh impetus should be given to our endeavors in this area. Indeed, the major projects that have been implemented, those that are being assessed and those that are in the pipeline open up vast, promising prospects.

In this regard, I call for an integrated, well thought-out regional development model that can be applied extensively. It should help us achieve complementarity between sectoral programs, meet the various challenges facing the region, and set up a regional economic system that stimulates growth, creates wealth and generates jobs, especially for young people.

Given its membership, its mandate and the skills at its disposal, the Economic, Social and Environmental Council is the institution most capable of preparing this ambitious project and of ensuring its success.  To carry out its mission, the Council should use a participatory approach that allows for the populations concerned and all interested national stakeholders to be involved.

By pursuing our untiring endeavors to achieve further economic, cultural and social progress in our southern provinces, we are in fact abiding by the oath of the Green March and the pledge to safeguard the Kingdom’s territorial integrity and full sovereignty, to preserve the nation’s sacred, immutable values and to continue building a country based on the rock-solid foundation of unity, progress and prosperity.

There can be no better tribute to the architect of the Green March, my revered father His late Majesty King Hassan II – may he rest in peace – and to the memory of the martyrs who made the ultimate sacrifice to preserve our territorial integrity.

As we commemorate the anniversary of the glorious Green March, I should like to praise our Royal Armed Forces, the Royal Gendarmerie, the security, police and auxiliary forces, the regional authorities and the emergency services, particularly our forces stationed in the Saharan provinces. I commend the mobilization, vigilance and selflessness they are displaying to preserve the nation’s security and stability and defend the country’s territorial integrity.