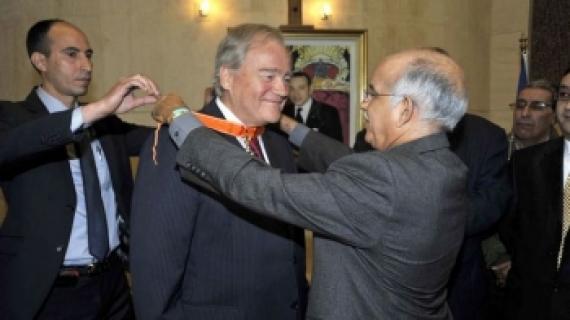 The President of the House of Advisors, Mohamed Cheikh Biadillah, on Saturday decorated Chairman of Moroccan-French parliamentary friendship group in the Senate, Christian Cambon, with the Alaouite wissam of the order of Commander, granted by King Mohammed VI.

"On High instructions of His Majesty King Mohammed VI, I have the honor and the privilege to decorate Chairman Christian Cambon with the Alaouite wissam of the order of Commander”, Biadillah said at an official ceremony held in the House of Advisors.

The Speaker of the House of Advisors said this wissam “illustrates the high interest shown by His Majesty the King to your proactive, thoughtful and constant commitment and your laudable efforts to promote ties of friendship and cooperation between Morocco and France”.

“This tribute goes also to distinguished members of the Moroccan-French parliamentary friendship group in the Senate for their efforts, their sense of responsibility and willingness to support the development of Moroccan-French relations”, Biadillah said.