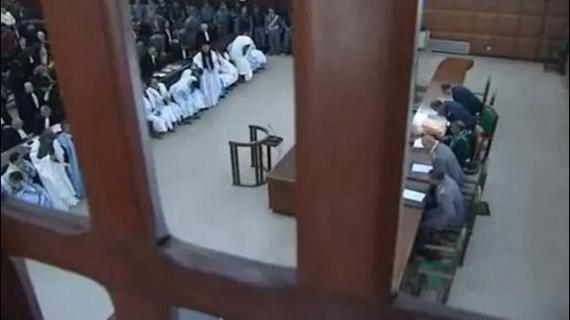 The Defense in the Gdim Izik trial presented their apologizes to the families of victims of the events that occurred during and after the dismantling of a protest camp near the southern city of Laayoune in 2010, human rights militants following the trial said.

The defense presented their excuses following the screening of a video that shows the serious abuses committed by the accused against policemen during the peaceful dismantling of the Gdim Izik camp, the militants said.

The 20-minute video shows a man armed with a knife slaying a policeman. This atrocious and barbaric acthas pushed some people, following the trial, to leave the courtroom.

This video has made the accused keep a low profile and stop chanting their slogans against the territorial integrity of the Kingdom and the legality of the military court.

Lawyers and observers believe the verdict of this case, followed by several national and international human rights NGO, will be announced Saturday.

The incident dates back to October 10, 2010, when residents of Laayoune drew a tent camp in Gdim Izik to claim social demands. Moroccan authorities initiated a dialogue and then presented a series of steps to respond to these demands gradually. But the dialogue did not result in ending the situation on the ground. Moroccan authorities then decided to peacefully dismantle the camp.