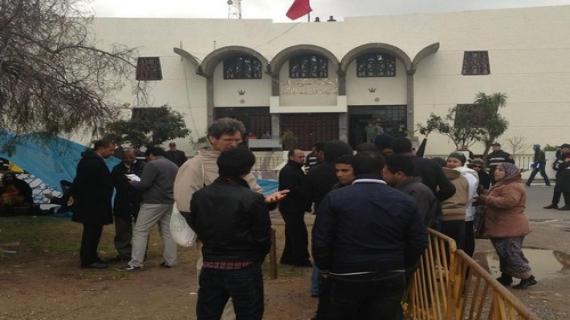 The military court in Rabat resumed, Tuesday, the trial of Gdim izim events, which occurred during and after the dismantling of a protest camp near the southern city of Laayoune in 2010.

At this meeting, which lasted more than eight hours, the military court resumed the hearing of eight of the 24 defendants involved in the events that date back to November 2010. The defendants dismissed all the charges against them.

The military court has heard 18 individuals, so far, among the 24 defendants who are facing charges of "constituting criminal bands, violence acts against police leading to premeditated death and corpse mutilation."

The trial which started on February 1, takes place in the presence of national and international observers, and several associations and human rights NGOs.

On October 10, 2010, residents of Laayoune drew a tent camp in Gdim Izik to claim social demands. Moroccan authorities initiated a dialogue and thenpresented a series of steps to respond to these demands gradually. But the dialogue did not result in ending the situation on the ground. Moroccan authorities then decided to peacefully dismantle the camp.