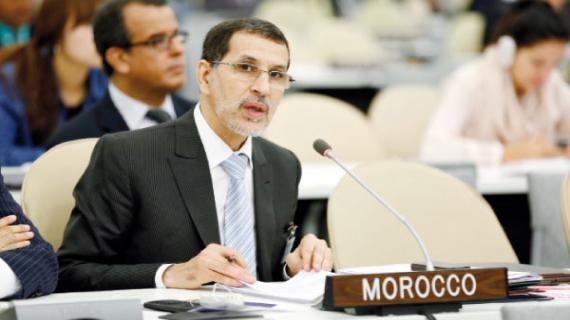 New York- Morocco has reiterated its “total commitment to the political process, under the aegis of the United Nations organization, on the basis of clear parameters set by the UN Security council in its latest resolutions, to reach a political consensus-based solution” to the Sahara issue, said Morocco’s minister of foreign affairs and cooperation before the UN general assembly.

Speaking during the general debate of the General assembly’s 68th session, Saad Eddine El Otmani recalled that “Morocco has interacted in a serious and credible manner with the Security council’s calls to find a final and negotiated political solution (to the Sahara issue), though its bold autonomy initiative, considered as serious and credible by the Security council for six years”.

However, went on the official, “the intransigence of the other parties that stick to an obsolete logic that runs counter to international juncture is blocking any evolution toward a comprehensive solution of this artificial conflict”.

EL Otmani also warned that this situation “threatens the stability of countries of the region, by creating an environment conducive to terrorism, smuggling and organized crime, a fact that prompts worries, as it was noted in last April’s report of the UN secretary general who voiced fears over the negative effects of instability in the Sahara and called for reaching a rapid settlement to the conflict.

The Moroccan FM recalled, in this context, that the latest resolutions of the UN Security Council call “the other parties to show a spirit of compromise and realism in order to reach a political solution that is wished for the Security Council and supported by the international community.

The minister further pointed out that at the regional level, “Morocco has permanently been endeavoring for the construction of the Magreban union, commensurate to other regional groupings, which would become an active force at the regional and international levels”, insisting that this union will contribute “to bring about fruitful partnership to guarantee the security and stability of countries of the region and fulfill the aspirations of the peoples of the five Maghreb countries”.

The official concluded that Morocco’s attachment to reviving the Maghreb Union project, “to secure the stability and prosperity of the five countries” (Algeria, Libya, Mauritania, Morocco, and Tunisia) is “consolidated by its determination to make of the Maghreban project, a tool for lasting and solidarity-based development for the people of the Maghreb and its neighbors, as it was confirmed by HM King Mohammed VI who pleaded for establishing a new, ambitious and promising, Maghreban order.