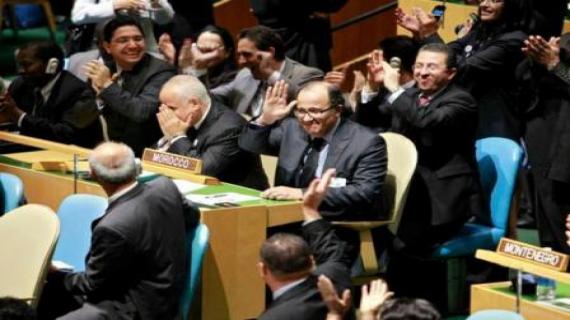 "The Security Council unanimously adopted this Thursday April 25, 2013 the resolution on the Sahara.

The new resolution comes as a continuation of previous resolutions adopted since 2007. Once again, the Council is confirming the pre-eminence of the autonomy initiative presented by Morocco and outlines parameters for a final political settlement based on realism and compromise.

The resolution crowns a process of several initiatives and contacts conducted by HM King Mohammed VI, may God assist Him, with Heads of state, messages conveyed by Royal envoys to various capitals and an information campaign on the Moroccan stance concerning various aspects of the Security Council resolution 2012 and Moroccan expectations as to the resolution of April 2013.

This process was coupled with a strong mobilization of all the Nation political actors and live forces, reflecting the ever-renewed national consensus on this national issue.

The Kingdom of Morocco takes note with satisfaction of this resolution that firmly confirms the unavoidable parameters of a political settlement, strongly preserves perspectives for a promising resumption of negotiations and outlines, in a clear and final way, the framework for addressing other aspects of this regional conflict.

Indeed, the Security Council confirms, in this resolution, that the MINURSO mandate and activities will be maintained in their current state, in accordance with assurances and guarantees expressed to His Majesty the King by Mr. Ban Ki Moon, Secretary General of the United Nations, during the phone conversation held on August 25, 2012.

The regional nature of this dispute is, henceforth, clarified and outlined through the direct and precise call made to neighboring States to be more resolutely involved, in order to end the present deadlock and move forward to a final political solution.

Therefore, Algeria is called to invest, in a constructive manner, in the quest of a political solution to this regional conflict.

Likewise, the resolution recognizes that the dispute settlement, combined with cooperation between the UMA member-States, will contribute to stability and security in the Sahel region.

The resolution does not stipulate any mechanism implying directly or indirectly, any sort of international human rights monitoring.

It recognizes the stages covered by Morocco in the consolidation of the National human rights council as well as the Kingdom's voluntary interaction with special procedures stemming from the Human rights council. It is a recognition of the initiatives and national efforts conducted by His Majesty the King, may God assist Him.

Consequently, this full and entire recognition of the adopted reforms gives evidence that the national framework remains the appropriate one for addressing human rights issue. The Security Council is thus giving a clear reply to recurrent attempts to exploit human rights at the service of a known political agenda.

Meanwhile, the Security Council has reiterated its request for a census of the Tindouf camps population, encouraging, for the first time, efforts made to this end. This is directed to the United Nations High Commissioner for Refugees and to the host State, Algeria, in accordance with the 1951 Convention related to the status of refugees. Implementation of this obligation, which is based on humanitarian considerations, is becoming increasingly necessary in a threatening context of insecurity and instability prevailing in the Maghreb-Sahel space.

Morocco hopes that the other parties will fully shoulder their responsibilities in keeping with the resolution, will seize the renewed opportunities it offers and engage, sincerely and resolutely in a genuine resumption of the negotiation political process.

As the region is facing major security challenges, settling the regional dispute over the Moroccan Sahara is, henceforth, a crucial strategic must for peace and stability in the region and a requirement for the economic and social development of the Maghreb countries."