Sahara: Polisario does not rule out a return to armed struggle 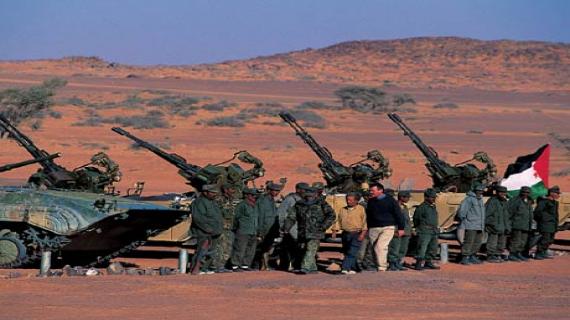 Once again the Polisario speak from both sides of the mouth. Talk of peaceful negotiations and threaten war. And with whose lives do they barter; whose sons and daughters do they offer as sacrifice? The Sahrawi hostages pay the price again for the greed and political gain of a few?

A senior Polisario Bachir Mustapha Essaid, threatened Wednesday a return to armed struggle against Rabat to solve the problem of Western Sahara against the stalled negotiations, at a conference in Algeria. The Polisario Front “does not rule out a return to armed struggle if the Morocco continues to delay the process of negotiations,” said Essaid, adviser to the president of the front, Mohamed Abdelaziz, when work was cadres of the movement organized in Boumerdes, about fifty kilometers east of Algiers.

"If the Moroccan authorities persist in their determination to hinder and delay the process of negotiations to find a solution to the Western Sahara issue, guaranteeing the right of the Saharawi people to self-determination, we will have to move to another stage, which is the armed struggle, "he told the Algerian APS.

Negotiations “are the best way, according to the Polisario Front, to achieve a just and lasting peaceful solution, ensuring the construction of good neighborly relations with Morocco,” said the same official.

Morocco, which controls since the 1970s the former Spanish colony, has a plan for autonomy under its sovereignty. But it was rejected by the Polisario, backed by Algeria, which calls for a referendum on self-determination. This dispute seems stalled, despite the efforts of Christopher Ross, the envoy of the Secretary General of the UN.

Polisario had launched an armed struggle against Morocco from the occupation by the kingdom during the Green March 1975 until a cease-fire in 1991.