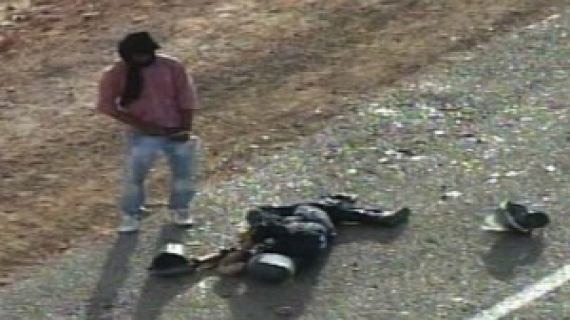 The murder of eleven members of the Moroccan police (in Gdeim Izik) will certainly not go unnoticed despite several international NGOs’ media stunts meant to influence the ongoing trial in favor of the 24 alleged perpetrators of these murders. The statement was made by the brother of a policeman who was foully murdered the way terrorists of Al Qaeda kill their victims and whose body was mutilated as shown in pictures circulating on internet social networks, including "Youtube". The killers are definitely entitled, as any Moroccan citizen, to a fair trial, but ultimately, they should pay for their ignominious deeds, said the victim's brother with tears of pain in his eyes. The 24 defendants are charged with "constitution of criminal gangs, violent assault of law enforcement agents that resulted in premeditated death and mutilation of corpses." The first hearing held on February 1st at the Military Tribunal in Rabat was attended by dozens of Moroccan and foreign observers and human rights activists. The hearing unfolded without any incident despite the tension that was prevailing inside and outside the court premises due to the presence of relatives of both the victims and the defendants.

The hearing was adjourned to Friday, February 8, at the request of the defense lawyers who sought to have more time to prepare their pleadings and summon witnesses. The policemen who intervened in November 2010 to dismantle the encampment of tents in Gdeim Izik, not far from Laayoune (Southern Morocco), had received orders not to make use of their firearms. But some intruders, having no connection with the peaceful demonstrators who were demanding only access to housing, employment and social assistance responded with unprecedented violence to the police come to dismantle the camp. The intruders were equipped with Molotov cocktails, gas bottles, swords and knives. Their violent assaulted against the law enforcement agents resulted in a heavy toll. In the city of Laayoune, the troublemakers ransacked and burned administrations, businesses and vehicles. The Leadership Council for Human Rights (LCHR), one of the main human rights organizations in the United States, which closely follows the trial, has launched a call last Friday to human rights organizations urging them to "be objective and to show sympathy to the bereaved families whose loved ones had been killed in cold blood." The LCHR President and founder of the Human Rights Caucus in the US Congress, Kathryn Cameron Porter, denounced "the extreme savagery of the criminal gang that led some of its members to urinate on the corpses of their victims." The 24 defendants face a heavy sentence if they are convicted.