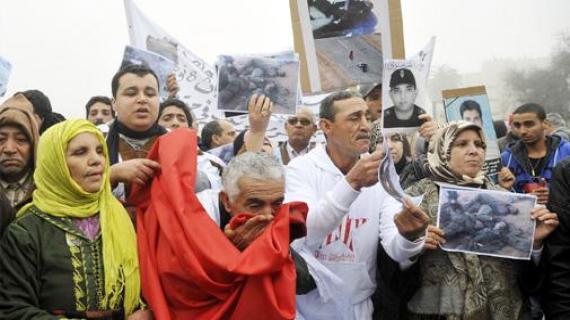 The trial of Gdem Izik defendants resumes on Friday in Rabat’s military court after it was postponed on Friday, February 1st. The postponement decision came in response to a request by the defense of the defendants so as to prepare enough evidence and call the witnesses and as the defendants refused to be tried in the absence of some of their lawyers.

The 24 people on trial in this case were arrested after being involved in the events dating back to October and November 2010 when some Sahraouis set tents in the outskirts of Laayoune as a form of protest against the lack of proper housing and unemployment in the city.

However, some implanted Polisario extremists rode on the peaceful protest to create a state of havoc after attacking the security forces with incendiary bottles, gas bottles, knives, swords and stones killing and mutilating 11 unarmed security agent. 70 other security were injured  in addition to 2 civilians. A first group of 225 persons who were judged were granted provisional release.

The defendants are charged with criminal gang formation, the use of hideous and brutal violence against security forces, murder and mutilation.

In a press conference held on January 31st, Mustapha El-kholfi, Minister of Communication and government spokesman, confirmed that the trial of the defendants of Gdim Izik events will take place within the framework of Moroccan law which stipulates that it’s military justice that should deal with offences and crimes against members of armed and security forces. This statement came to put an end to the demands of those who called to hold the trail in a civil court.

A group of associations and human rights organizations created a working group to observe the various stages of the trial of Gdem Izik defendants, stressing that they will later issue a statement, including their observations on the conduct of the trial and the availability of fair trial guarantees. The working group comprises representatives from the Moroccan Observatory of Public Freedoms, the Centre for Strategic Thinking and Defense of Democracy, the Association Intermediary for Democracy and Human Rights, and the Moroccan Human Rights Authority.

According to Algeria’s News Agency (APS), the coordinator of the Gdem Izik defendants’ families had recently demanded, in a press conference at the headquarters of the Moroccan Association for Human Rights, that international law be used in the trial of those it called “strugglers and militants”, a fact which Moroccans reject and consider as a violation of the laws and regulations in force in the country.

A number of journalists who attended the press conference expressed their deep surprise at how the APS reported the phases of this conference stressing that the APS journalists were not present and its correspondents in Rabat were not among the journalists who had registered their names on the list of attendees, unless the APS was represented by the so called ‘Sahraoui militants’ who are normally Algerian intelligence agents!

It should be noted that the events of Gdim Izik in 2010 resulted in a considerable material loss in public enterprises and private property in addition to the murder of 11 unarmed security forces members. Immediately after the events, the Moroccan parliament formed a committee to look into the causes and the implication of the situation. A number of Moroccan and international non-governmental organizations, including Human Rights watch headed to Laayoune to conduct investigations on the events.

In a statement released last Friday, Kathryn Porter, president of the Leadership Council for Human Rights and founder of the human rights caucus at the US congress, “welcomed the decision of Morocco to postpone the trial of the defendants involved in the protest at the request made by the defense lawyers to prepare their cases and call for witnesses.”

“This decision demonstrates, once again, the commitment of the Moroccan authorities to respect the rule of law and to preserve the dignity and freedom of all Moroccans following the political and democratic process initiated under the leadership of the King of Morocco,” it added.