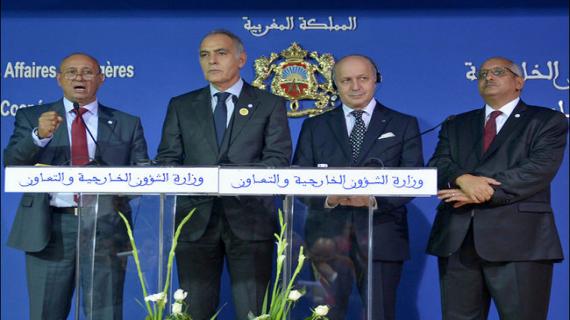 No country can meet security challenges by itself, Libya's foreign minister told his Sahel-Saharan counterparts at a border security summit held Thursday (November 14th) in Rabat.

Foreign Minister Mohamed Abdelaziz said this held true for all countries in the region, regardless of the countries' means.

Ministers described the move as an important step towards curbing jihadist unrest, particularly in Mali and Libya.

The training centre, which Moroccan Foreign Minister Salaheddine Mezouar said could be in Rabat, would be complemented by closer intelligence co-operation and the use of new technology at the borders.

Libya was tasked Thursday with supervising implementation of the Tripoli action plan and the Rabat Declaration.

"The Libyans have been given the mandate to start, in consultation with the neighbouring countries, to establish this mechanism," Abdelaziz said.

Moroccan Interior Minister Mohamed Hassad said that the countries of North Africa and the Sahel-Saharan area needed to exchange information, set up an early warning system and harmonise their legal arsenal.

"The fight against the threats faced by countries in the region is an absolute priority. Therefore we need to get over our differences and co-ordinate our efforts to meet those challenges, without closing in on ourselves, ensuring that those borders remain a place for human, commercial and cultural exchange between our peoples," he explained.

The Moroccan interior minister said that vigilance was key in neutralising the threats from terrorist groups and criminal networks. They exploit weaknesses in the exchange of information and co-operation between countries, he added.

"Terrorism can only be thwarted by partners," he pointed out.

He cited the case of Libya, "a country where threats continue to grow at the borders against a general backdrop of instability in the Sahel-Saharan area, requiring a co-ordinated response to shared challenges".

According to political analyst Jamal Farhane, the presence at the conference of representatives from a number of countries in the region as well as those from international partners showed there was growing awareness of the security challenges that require concrete action from the whole international community.

Government ministers and officials from Africa, Europe and the US also attended the event.

Delegates from the Maghreb Union, the Arab League, NATO, the UN and Economic Community of West African States (ECOWAS) also took part in the forum.