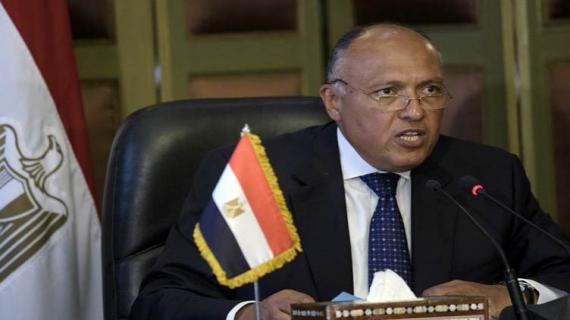 Egypt’s Foreign minister Sameh Chokri underlined, on Tuesday, that his country, which closely follows the Sahara issue, remains attached to a settlement of this conflict pursuant to international law and UNSC resolutions.

Speaking at a meeting with a delegation of Moroccan media professionals on a visit to Egypt, Chokri recalled his country’s recent position at the Security Council and its support for Morocco, following UNSG statements, highlighting Egyptian people and administration’s esteem and consideration for Morocco.

He expressed his wish to achieve a solution enabling to overcome tensions, and that Morocco continues to manage this matter within the framework of the UN Security Council resolutions, noting that his country’s stance is based on such parameters.

Chokri emphasized that Egypt has always supported Morocco’s return within the African Union, noting that only Morocco can decide on what is convenient for its interests and politics.

During the deliebrations that follwoed the controversy caused by Ban Ki-moon’s statement in March in Algeria in which he described Morocco’s presence in the Sahara as “occupation,” Egypt played, along with Fance, Spain and Senegal, sided with Morocco and prevented the Security Council from showing support for the UN chief in his personal friction with Rabat.