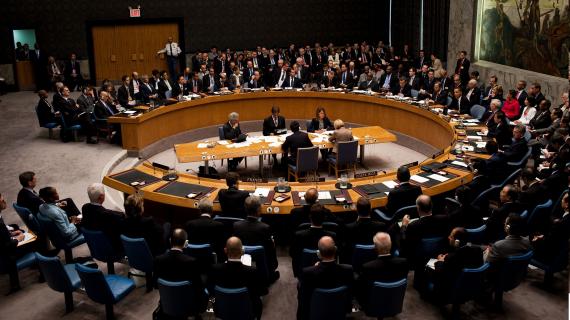 During a high level meeting on the situation in the Sahel convened by Morocco, President of the security Council of the month of December, Saad Dine El Otmani, the Moroccan Minister of Foreign Affairs and cooperation delivered a statement in which he stressed the resolve of Morocco to play a key role in the international efforts aimed at fighting international organized crime, terrorism and help Mali recover its political stability.

In front of Secretary General Ban Ki-Moon and Mr. Romano Prodi, the newly appointed Special Envoy for Sahel, he underlined the regional dimension of the crisis in Mali and affirmed the need to adopt an inclusive and concerted approach in the collective management of this problem. He also stated that Morocco wishes to see Prodi’s strategy be presented to the Security Council early next year.

Many aspects of the situation were enounced, including the security of the region, humanitarian action, food crisis and environmental issues. Indeed, he reminded the Security Council of the urgency of the desertification, poverty and malnutrition, which has « transformed the region into a hideout for terrorist groups », mainly affiliated to Al Qaeda. Those armed separatist groups were blamed for weapons proliferation, human trafficking and the resurgence of kidnappings in the troubled region. According to El Otmani, the neighboring states’ lack of resources to control the long Saharan borders is « preventing the stability and continuity of life in an area where the climate is already difficult ».

The absence of economic activity and development are also responsible for skyrocketing unemployment, especially among young people of the region, “which creates an opportunity for terrorists and drug dealers to approach and lure them,” said the minister.

In this perspective, the minister reiterated Morocco’s dedication to securing and stabilizing Africa, and its concern about the dangerous situation in Sahel which remains the center of its attention, especially in the context of its Presidency of the Security Council this month.

El Otmani appeared determined to protect The Arab Maghreb Union’s borders, especially from criminal networks coming from Mali. In this regard, he urged the international community to support the State of Mali atthe political, economic and humanitarian level and help it fight “dangerous terrorist groups such as Al-Qaeda in the Islamic Maghreb (AQIM) and the Movement for Unity and Jihad in West Africa (MUJAO). “He also reaffirmed Africa’s unanimous will concerning that matter.

while  commending the initiatives of the international community, he deplored the fact that they were « not sufficient to face the problems of the Sahel in a holistic and coordinated way ». However, he praised the work of organizations such as the Red Cross and the HCR and their efforts on the ground.

The best way to help the region of the Sahel become immune to international organized crime an terrorism is by helping its countries achieve, which according to the Moroccan minister, “can only be achieved with the support of the international community, including the World Bank, The African Development Bank and the Islamic Development Bank.”

Saad Eddine Otmani showed Morocco’s readiness to shoulder its responsibility in stabilizing the Sahel and protecting  its interests and those of its neighbors and allies.