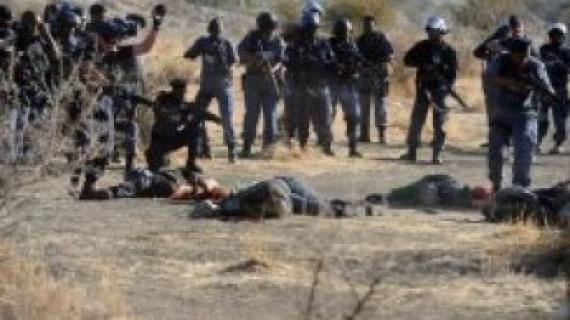 South Africa’s ruling ANC and its powerful trade union ally have said they will boycott a memorial ceremony on Friday to mark the one-year anniversary of the killing of 34 striking miners, citing disapproval of its organizers.

South Africa's ruling ANC said it will boycott a ceremony Friday marking one year since the killing of 34 miners because the event was organised by an "illegitimate" group.

"The ANC finds it immoral and totally unacceptable that such a traumatic incident could be turning into a political playground by some political parties," the ANC said in a statement.

On August 16 last year South African police opened fire on a crowd of striking platinum miners at the Marikana mine northwest of Johannesburg, killing 34.

Earlier Thursday, the powerful National Union of Mineworkers, an ANC ally, had also said they would boycott the event, because it had been "hijacked" by their rivals the Association of Mineworkers and Construction Union (AMCU).

The AMCU, which led the Marikana strike, and the NUM are locked in a bloody turf battle that has seen union leaders on both sides assassinated.

The boycott shreds hopes that the unions could use the event to move beyond deadly violence between members.

The AMCU had earlier this week put aside its differences with the NUM by asking it to jointly make a peace call at the commemorations.

Thousands of mine workers and sympathisers are expected to gather Friday near where the deaths occurred.

Since August last year at least eight prominent members from both the NUM and AMCU have been murdered.

The latest victim, a local NUM leader, was gunned down on Monday.

In the last 12 months, the AMCU's hardline stance on wage negotiations has enticed legions of NUM members to jump ship, amid accusations the more established union is in league with mine owners.

The AMCU now represents 70 percent of union members among the 27,000 workers at platinum giant Lonmin, which operates the mine where the 34 workers were killed.

The NUM, once the dominant union at Lonmin, now has 20 percent.

The NUM said it would "desist from organising separate commemorations as these may fuel tensions."