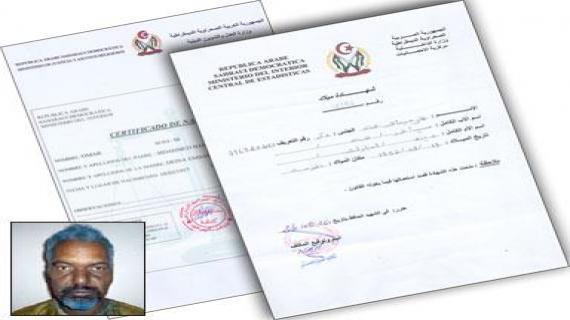 The deal, which saw the release of the two Spanish aid workers held by Al-Qaeda in exchange of deporting Sahraoui from Mauritania to Mali, revealed that the terrorist network is benefitting from the murky grounds controlled by the separatist movement Polisario which is fighting for decades to get independence of the Western Sahara region from Morocco.

Sahraoui is a member of the Sahrawi separatist movement as revealed by official documents issued by the so-called "Sahrawi Arab Democratic Republic" aka Polisario, which is based in Tindouf area of Algeria.

A Mauritanian court sentenced Sahraoui, who was the mastermind the abduction late November 2009 of three Spanish aid workers carried out by Al-Qaeda in Islamic Maghreb (AQIM), to life imprisonment.

The court alleged that Sahraoui was recruited by the Salafist Group for Preaching and Combat, before becoming Al-Qaeda’s North African branch.

The North African sources denounced Sahraoui’s extradition to Mali, saying that the proof provided by Mauritanian authorities on Sahraoui’s nationality was incorrect as shown on his birth certificate issued by the Polisario.

Sources said that Sahraoui has 'disappeared' after he was handed to Mali.

A Malian court reduced Sahraoui’s life sentence to 12 years in prison on appeal on July 21, 2010.

The Spanish aid workers were kidnapped on the road between the northern town of Nouadhibou and the capital Nouakchott.

Despite the affair’s seriousness and regional implications, Nouakchott extradited Sahraoui to Bamako on August 16 although there was no report of a formal request made by the Malian authorities to their Mauritanian counterparts.

The North African sources were worried that Sahraoui would rejoin AQIM network in exchange of the release of Spanish hostages held by the group of Mokhtar Belmokhtar, emir of AQIM in the Sahel.

Nouakchott sources said that Mauritanian authorities justified Sahraoui’s extradition to Mali under the pretext of his Malian nationality, based on the existence of protocols of mutual legal assistance between the two countries.

However, documents issued by the Polisario Front showed that Sahraoui was born in Farsia in Western Sahara.

Official documentations, like birth certificates, are usually issued by Polisario to active members of the movement.

Spain pressured Mauritania to release Sahraoui as part of its negotiation process with the kidnappers in a bid to release its two nationals who were still held by Al-Qaeda.

Sources confirmed that Madrid had threatened to suspend its aid and those granted by the EU despite the danger of dealing directly with Al-Qaeda in the Sahel.

Nouakchott had turned a blind eye on the release of four Al-Qaeda militants by Bamako in exchange of the release of four Western tourists held hostages by the terrorist organization in northern Mali despite both countries’ declared policy of not negotiating with terrorists.

The North African sources said if the operation of swapping Sahraoui with the two kidnapped Spanish aid workers goes through, it will not only mean submission to Al-Qaeda pressure, but will also give the terrorists, who are moving freely in south of Algeria, and the Polisario controlled zone, to pocket a windfall of 10 million Euros.

Algeria, which prides itself for labelling itself as the champion of the fight against terrorism in the region, suffered a significant blow for not being invited to the regional security meeting held in Bamako on August 6-7.

Bamako hosted a security meeting to discuss the Al-Qaeda’s increased danger amid the presence of Mali, Niger, Chad, Burkina Faso, Senegal and Nigeria.

Observers believe that Al-Qaeda’s hotbeds are in the Polisario camps in southern Algeria, stressing that Algeria tried to justify to Mauritania that no Sahrawis had been involved in the kidnapping of Spanish aid workers.

Algeria fears that Morocco would exploit the affair by highlighting that Algeria-backed Polisario militants could be involved in Al-Qaeda-related terrorist activities.

Polisario: Threat in the Desert