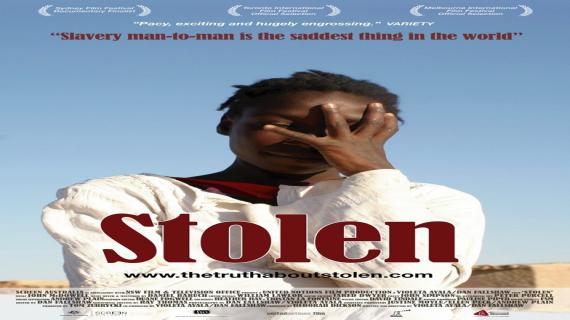 The story begins with Fetim, a black Saharawi who was taken from her mother as a toddler by Deido, a ‘white-Arab’ woman. Thirty years later Fetim is reunited with her mother through a UN family reunion program.The reunion sparks a revolution amongst the black Saharawis who speak out against being slaves. Black children are taken away from their parents, people are beaten by ‘white-Arab’ masters, women are the sexual property of the master, they have their names changed, require liberation papers to be free and can’t marry without the master’s permission.

There are at least 2 million black people living in slavery in North Africa.

STOLEN is a thought provoking and hard-hitting film that addresses the taboo of slavery in North Africa. In 2008 Human Rights Watch published a report on the camps and Western Sahara. It revealed that slavery still affects the black minority in the Polisario refugee camps and Western Sahara, the report included a liberation paper signed by the Polisario’s Ministry of Religious and Cultural Affairs. Nevertheless, most North African regimes including the Polisario refuse to acknowledge the existence of slavery, even the United Nations who monitor the camps refers to slavery as a cultural practice.

Something Fetim’s mother said puts this in perspective. She asked “what do you call it when a child is taken away from its parents?”

She then asked “what do they call it when they took my daughter away from me, a black woman?” She answered herself. “A cultural practice!”

Our aim is to get STOLEN to reach a wider audience, the film’s intention is to generate discussion about and attention to this ignored issue. We want slavery to be criminalised in every country in North Africa and legal action taken against the perpetrators. In the meantime, we want the families separated by slavery to be reunited.

We will organise charity screenings alongside a cinema release in the US in order to raise awareness of the problem and put pressure on international organisations such as the UN to take action.