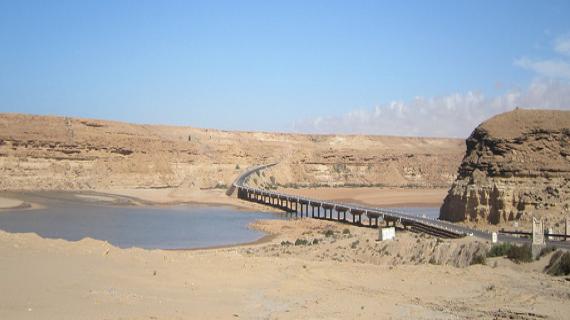 The construction of the first bridge under the Tiznit-Laayoune-Dakhla expressway project in Morocco was launched by the Ministry of Equipment, Transport, and Logistics.

The bridge is to be built over the Oued Draa in the Tan Tan province. The construction outlay amounts to 39 million dirhams and is expected to limit the road unavailability through the flood season at the time to improve the services of the road network and improve the safety conditions.

Meanwhile, a new registration center for vehicles that meet quality criteria was launched by the minister in the province of Guelmim. This center which is worth 8.5 million dirhams covers an area 960 square meters.

The province will also be installed with two overload control stations with mobile scales in the National Highway No. 1 level for a budget of 200,000 dirhams. The minister also followed up with the development of the road section connecting Bouizakaren maintenance work in Guelmim on a length of 40 kilometers for 83 million dirhams and the national section of Highway No. 12 connecting Guelmim Assa on a length of 20 kilometers for a budget of 10 million dirhams.

The minister also gave updates on the situation of the construction of a structure on the Oued Sayad located in National Highway No. 12 connecting to Guelmim Assa at 17 million dirhams.