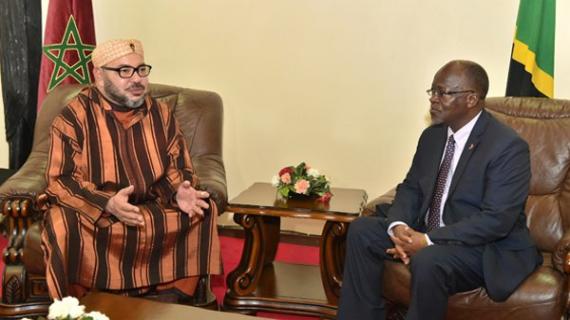 According to a statement released by the MAP, following King Mohamed VI’s visit to Tanzania from October 23 to the 25, the Tanzanian President has expressed his support for a fair, lasting and mutually acceptable political solution to the Sahara issue. It also supports Morocco’s efforts to reintegrate the African Union.

President Jon Pombe Joseph Magufuli expressed his support for efforts by the United Nations to find a fair and just solution to the Sahara issue.

“In a spirit of reconciliation and of finding a lasting solution, Tanzania understands Morocco’s established position and welcomes its serious and credible efforts, and is ready to contribute to the implementation of relevant resolutions of the United Nations Organization on this issue,” said the joint statement carried by MAP.

During the visit, Tanzania also expressed support for Morocco’s decision to reintegrate the African Union. “We support Morocco’s integration into the Pan African family as soon as the next summit.

President Magufuli also declared that Moroccans will now be able to enter Tanzania without a visa. He and King Mohamed VI also discussed the idea of opening a Moroccan Embassy in Tanzania and a Tanzanian Consulate in Morocco.