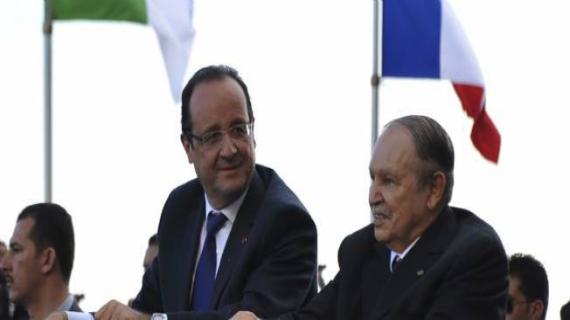 Tenants of the Algerian Presidential palace of El Mouradia are wearing a long face after the first official visit France’s François Hollande paid to Algiers December 19-20.

Their disappointment was actually so great about the French President’s stance on the Western Sahara issue, a stance that is, according to the Algerian Presidency circles, blindly aligned on Morocco’s stance.

If French Prime Minister Jean Marc Ayraut has clearly reaffirmed his country's support to the Moroccan autonomy plan, during his first official visit to Morocco (dec.12-13), the French head of state was keen on sending a similar message to the Algerian leaders even though he brought into play great diplomatic skills to veil the message in order not to offend his hosts.

This was short of Algerian authorities’ expectations. These authorities were actually pinning hopes that Hollande’s visit would be an opportunity to "rebalance" France’s relations with the two enemy brothers of North Africa.

When asked by the Algerian press to comment on the Sahara issue, Hollande simply replied that this matter was in the hands of the UN.

He said:"France supports a negotiated and mutually acceptable solution to the Sahara issue, in accordance with the Security Council resolutions and the parameters clearly defined by the UN body."

That was a diplomatic way to tell Algerian leaders to waive their influence and to show more neutrality with respect to the territorial dispute between Morocco and the Sahrawi separatist movement over the Western Sahara.

President Hollande told the Algerian El Watan and El Khabar dailies that "realism and a spirit of compromise must prevail to enable (the parties) reach a political solution to this dispute which has lasted for too long."

France is "ready to help the parties move towards a solution," he said.

Paris has repeatedly voiced unequivocal support for the Moroccan autonomy plan, either when France was ruled by Sarkozy’s rightist party or at present when the reins of power are in the hands of Hollande’s leftist Socialist party.

This steady stand was besides reaffirmed by Jean Marc Ayraut as well as by the chairwoman of the Foreign Affairs Committee at the French National Assembly, Elizabeth Guigou, during their visit to Rabat, December 12-13. The Moroccan proposal is "the most credible initiative to bring out the Sahara conflict out of the deadlock," Mrs Guigou had said.

How long can the Algerian regime’s strongmen still hold on to their blackmail practices against their Moroccan neighbor and its territorial integrity? That is a very difficult question that even the most sophisticated pundits and observers closely following the Sahara issue have so far failed to answer.