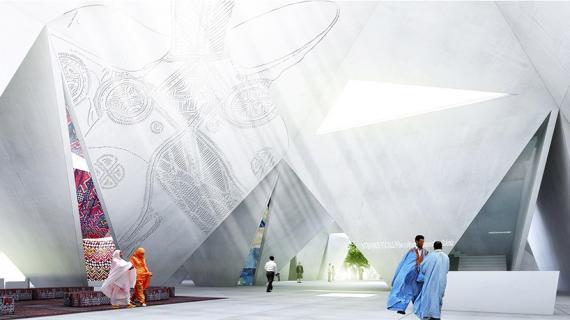 EGA – erik giudice architects is a multidisciplinary office based in paris and stockholm, building international recognition through winning competition entries and built projects in a wide range of scales and programs. for a museum and cultural center in dakhla, morocco, the aim was to invent a new type of space, that would not duplicate the existing models, by creating a hybrid that takes into account the realities of the cultural moroccan context. to do so, the shape of the traditional nomadic tent was used as a starting point for the architectural concept.

the museum expresses its identity through this simple and straightforward architectural concept, implemented to provide an extremely rich, original, and unique spatial experience. a bold action for a remarkable project, the dakhla museum is a cultural and singular space that exerts a certain fascination and where imagination comes to life. its design is revealed through a simple architecture, but also extremely elaborated volume. the project draws the idea of its framework from the concept of the tent and the desert, creating different sized outlines that make it unique and visible, wanting to draw in a large public. the building is in visual harmony with the bay of dakhla, with its folded shapes, that create an evolving dynamic  structure. its vertical materialization allows the for project’s functionality. the interiors are equally powerful as a wall system provides a diversity of spaces and exhibition conditions. the visitor moves freely, in the continuous volumes of the museum, guided by his own sense of space and sensitivity. there is no defined circulation, no corridors, just the freedom of taking a stroll through the sahara.