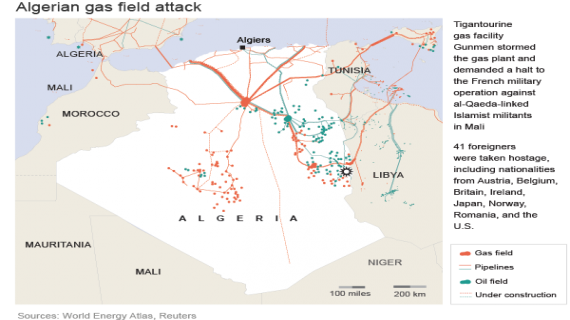 Thirty hostages and at least 11 Islamist militants were killed on Thursday when Algerian forces stormed a desert gas plant in a bid to free many dozens of Western and local captives, an Algerian security source said.

Details remained scant - including for Western governments, some of which did little to disguise irritation at being kept in the dark by Algeria before the raid and its bloody outcome.

Two Japanese, two Britons and a French national were among at least seven foreigners killed, the source told Reuters. Eight of the dead hostages were Algerian. The nationalities of the rest, as well as of perhaps dozens more who escaped, were unclear.

Americans, Norwegians, Romanians and an Austrian have also been mentioned by their governments as having been captured.

Underlining the view of African and Western leaders that they face a multinational, al Qaeda-linked insurgency across the Sahara - a conflict that prompted France to send troops to neighboring Mali last week - the official source said only two of the 11 dead militants were Algerian, including their leader.

After an operation that appeared to go on for some eight hours, after Algeria refused the kidnappers' demand to leave the country with their hostages, the bodies of three Egyptians, two Tunisians, two Libyans, a Malian and a Frenchman were found.

So too was that of Taher Ben Cheneb, an Algerian whom the security official described as a prominent jihadist commander in the Sahara.

The gunmen who seized the important gas facility deep in the desert before dawn on Wednesday had been demanding France halt its week-old offensive against Islamist rebels in Mali.

French President Francois Hollande said the hostage drama, which has raised fears of further militant attacks, showed that he was right to send more than 1,000 French troops to Mali to back up a West African force in support of Mali's government.

A Algerian government spokesman, who confirmed only that an unspecified number of hostages had died, said the tough response to a "diehard" attitude by the militants showed that, as during its bloody civil war against Islamists in the 1990s, Algiers would not negotiate or stand for "blackmail" from "terrorists".

The apparent ease with which the fighters swooped in from the dunes to take control of an important energy facility, which produces some 10 percent of the natural gas on which Algeria depends for its export income, has raised questions, however, over the reliability of what was thought to be strong security.

Foreign companies said they were pulling non-essential staff out of the country, which has only in recent years begun to seem stable after a decade of blood-letting.

"The embarrassment for the government is great," said Azzedine Layachi, an Algerian political scientist at New York's St John's University. "The heart of Algeria's economy is in the south. where the oil and gas fields are. For this group to have attacked there, in spite of tremendous security, is remarkable."

Algiers, whose leaders have long had frosty relations with the former colonial power France and other Western countries, may also have some explaining to do over its tactics in putting an end to a hostage crisis whose scale was comparable to few in recent decades bar those involving Chechen militants in Russia.

Communication Minister Mohamed Said sounded unapologetic, however. "When the terrorist group insisted on leaving the facility, taking the foreign hostages with them to neighboring states, the order was issued to special units to attack the position where the terrorists were entrenched," he told state news agency APS, which said some 600 local workers were freed.

A local source told Reuters six foreign hostages had been killed along with eight of their captors when troops fired on a vehicle being used by the gunmen at the Tigantourine plant.

The standoff began when gunmen calling themselves the Battalion of Blood stormed the facility early on Wednesday morning. They said they were holding 41 foreigners.

In a rare eyewitness account of Wednesday's raid, a local man who had escaped from the facility told Reuters the militants appeared to have inside knowledge of the layout of the complex and used the language of radical Islam.

"The terrorists told us at the very start that they would not hurt Muslims but were only interested in the Christians and infidels," Abdelkader, 53, said by telephone from his home in the nearby town of In Amenas. "'We will kill them,' they said."

Mauritanian agency ANI and Qatar-based Al Jazeera said earlier that 34 captives and 15 militants had been killed when government forces fired at a vehicle from helicopters.

British Prime Minister David Cameron said people should prepare for bad news about the hostages. He earlier called his Algerian counterpart to express his concern at what he called a "very grave and serious" situation, his spokesman said.

"The Algerians are aware that we would have preferred to have been consulted in advance," the spokesman added.

Norwegian Prime Minister Jens Stoltenberg said he had been told by his Algerian counterpart that the action had started at around noon. He said they had tried to find a solution through the night, but that it had not worked.

"The Algerian prime minister said they felt they had no choice but to go in now," he said.

The incident dramatically raises the stakes in the French military campaign in neighboring Mali, where hundreds of French paratroopers and marines are launching a ground offensive against Islamist rebels after air strikes began last week.

"What is happening in Algeria justifies all the more the decision I made in the name of France to intervene in Mali in line with the U.N. charter," Hollande said, adding that things seemed to have taken a "dramatic" turn.

Algerian Interior Minister Daho Ould Kablia said the kidnappers were loyal to Mokhtar Belmokhtar, a veteran Islamist guerrilla who fought in Afghanistan and set up his own group in the Sahara after falling out with other local al Qaeda leaders.

A holy warrior-cum-smuggler dubbed "The Uncatchable" by French intelligence and "Mister Marlboro" by some locals for his illicit cigarette-running business, Belmokhtar's links to those who seized towns across northern Mali last year are unclear.

Britain said one of its citizens was killed in the initial storming on Wednesday and "a number" of others were held.

"This is an ongoing situation and we are seeking clarity," White House spokesman Jay Carney told reporters.

Norway's Statoil, which runs the plant with BP of Britain and Algeria's state energy company, said it had no word on nine of its Norwegian staff who had been held, but that three Algerian employees were now free.

BP said some of its staff were being held but would not say how many or their nationalities.

Japanese media said five workers from Japanese engineering firm JGC Corp. were held, a number the company did not confirm. The Irish government said one Irish hostage was freed.

Hollande has received public backing from Western and African allies who fear that al Qaeda, flush with men and arms from the defeated forces of Libya's Muammar Gaddafi, is building a desert haven in Mali, a poor country helpless to combat fighters who seized its northern oasis towns last year.

However, there is also some concern in Washington and other capitals that the French action in Mali could provoke a backlash worse than the initial threat by militants in the remote Sahara.

The militants, communicating through established contacts with media in neighboring Mauritania, said on Wednesday they had dozens of men armed with mortars and anti-aircraft missiles in the compound and had rigged it with explosives.

They condemned Algeria's secularist government for letting French warplanes fly over its territory to Mali and shutting its border to Malian refugees.

The attack in Algeria did not stop France from pressing on with its campaign in Mali. It said on Thursday it now had 1,400 troops on the ground there, and combat was under way against the rebels that it first began targeting from the air last week.

The French action last week came as a surprise but received widespread public international support. Neighboring African countries planning to provide ground troops for a U.N. force by September have said they will move faster to deploy them.

Nigeria, the strongest regional power, sent 162 soldiers on Thursday, the first of an anticipated 906.

A day after launching the campaign in Mali, Hollande also ordered a commando raid in Somalia on Saturday, which failed to free a French hostage held by al Qaeda-linked al Shabaab militants since 2009. Al Shabaab said on Thursday it had executed the hostage, Denis Allex. France said it believed he had died in the raid.