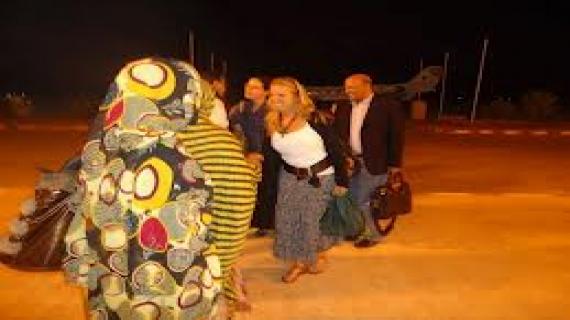 Saharawi activists in the Tindouf camps succeeded to hand over  to the President of the Robert F. Kennedy Center for Justice and Human Rights, Kerry Kennedy, a damning report on the embezzlement of humanitarian aid by Polisario leaders. The activists succeeded to approach Mrs Kennedy and her accompanying delegation despite the exceptional tight security measures deployed on the occasion of their visit to the Polisario-controlled camps in Tindouf.

A reliable source from Tindouf told us that a young woman,  member of the Coordination of Sahrawi women which is militating to change the Polisario leadership, has managed to hand over to Kerry Kennedy an envelope containing documents attesting to the misappropriation of the international humanitarian assistance, initially destined to the refugees, by close aids of the Polisario leader, Mohamed Abdelaziz, including his wife and Minister of Culture, Khadija Bent Hamdi.

According to  M.O.K., a Sahrawi dissident who spoke on condition of anonymity out of fear of reprisal, the envelope contains a list of names, photos, figures and many testimonies on several humanitarian aid embezzlement operations as well as data on the colossal fortunes accumulated by influential members of the Polisario.

During their trip to Tindouf on Wednesday August 29 and their visit to the few places where they were allowed to go, under the pretext that an abduction threat was looming on Mrs Kennedy, the US delegation members were constantly escorted by a heavy security cordon of militias of the Polisario and several elements of the Algerian intelligence services wearing the Sahrawi traditional “gandouras”, the same source said.

Three days before the arrival of Kerry Kennedy and her delegation, civilian militias of the Polisario, supported by units of the Algerian police, military police and military intelligence services (DRS) and escorted by military trucks and armored vehicles, have combed every inch of all the Tindouf camps, said  M.O.K., who is settled in Rabouni.

Taking advantage of the isolation of the Tindouf camps from the rest of the world and the absence of Internet and foreign media on the spot, these units proceeded to a large-scale crackdown and arrested opponents, activists, dissidents, and young activists of the March 5 protest movement. Neither minor children nor women were spared. Those arrested were put aboard trucks and pick-ups and driven to an unknown destination towards north-eastern Algeria.

As there were reports about a possible kidnapping of Kerry Kennedy, members of the U.S. delegation did not ask too many questions about the heavy security apparatus nor about the reasons behind the cancellation of the visit to Rabouni that was initially on the schedule, the same source said.

Polisario opponents and protesters who were waiting the US delegation in the Rabouni camp have nevertheless managed to convey secretly to Mrs Kennedy letters informing her about the real conditions prevailing in the refugee camps and about the abuses committed by the Polisario and its militias.

According to our source, Kerry Kennedy had expressed the wish to meet the family of Mustapha Salma Ould Mouloud, but the Polisario leadership rejected this request. The rejection of this request and of other requests and the security constraints imposed on the US delegation, rushed its departure from Tindouf, where it was to stay, as initially planned, at least three or four days.