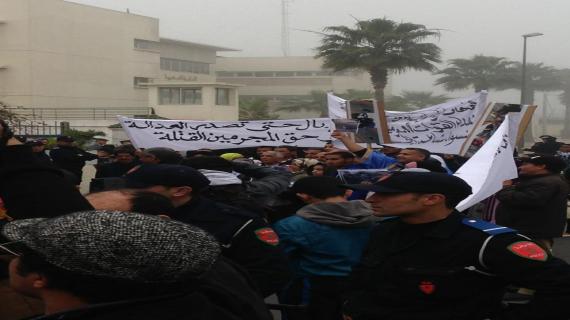 The trial of a group of persons allegedly linked to events that followed the dismantling of Gdim Izik camp near Laayoune in 2010 was postponed until Friday February 8. The 24 defendants appeared before a military court in Rabat on Friday.

Before the opening of the trial, there was controversy on the pertinence of judging these people before a military court and on allegations of torture and degrading treatment against some detainees.

A judiciary source explained the defendants are appearing before a military court because they committed violence acts against soldiers and security forces.

The source said their arrest respected due process, noting that the national law guarantees to the defendants and their attorneys the right to request a medical expertise in case of torture or degrading treatment.

On October 10, 2010, the inhabitants of the southern city of Laayoune erected tents, in the city outskirts, in Gdim Izik, in order to defend legitimate social claims, mainly claims related to housing and employment.

After holding a series of fruitless dialogue sessions with the protesters and proposing to take several measures, the Moroccan authorities started peaceful action to dismantle the camp in a bid to impose the respect of law and the preservation of public order, says a local source that followed the events.

The security forces were met by small groups with violence, stone-throwing, Molotov cocktails and gas bottles. The chaos soon reached the city of Laayoune where public infrastructure and goods were burnt and private properties were looted.

These events killed 11 security agents, including a fireman, injured 70 others and caused important material damages to public buildings and private goods and properties.

The parliament had set up a fact-finding commission while several Moroccan and foreign NGOs and human rights advocacy groups visited the region to investigate the facts.

A first group of 225 persons who were judged were granted provisional release.

On Thursday, an association representing the victims of the Gdim Izik events said justice should be done.

The association says that while justice will not alleviate the bereavement of families, it will at least enable them to do their mourning, understand what really happened and punish those responsible for the death of their relatives.

A group of associations have set a work group to observe the trial while families are calling international NGOs, human right-advocacy associations and UN competent bodies to act to guarantee a fair trial and that justice be done in the Gdim Izik camp case