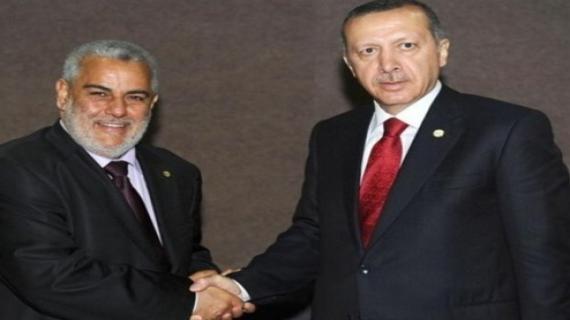 The Turkish Prime Minister Recep Tayyip Erdogan expressed his country’s position on the Sahara issue Monday on a visit to Morocco.

In a press conference held at the Ministry of Foreign Affairs, Rabat, with the Moroccan Prime Minister Abdelilah Benkirane, the Turkish Prime Minister Recep Tayyip Erdogan said: “Turkey does not recognize the Polisario Front, and we are supporting the negotiations led by the United Nations to find a just solution to the Sahara.”

The Turkish premier said that Turkey is ready to help “overcome the existing problems between Morocco and Algeria.”

As part of his tour of Maghreb region, Erdogan, who is expected to hold talks with Moroccan officials, including Morocco’s Foreign Minister Saad Eddine El Othmani, confirmed his country’s support for the Moroccan Sahara issue and the Autonomy proposal proposed by the kingdom.

It is worth mentioning that the Maghreb tour comes on the fourth straight day of anti-government protests tt erupted on Friday when trees were torn down at a park in Taksim Square against government plans to redevelop the area.

According to AFP, Erdogan said on Monday the situation in Turkey was “now calming down” and accused political “dissidents” of inciting the protests.

“On my return from this visit, the problems will be solved,” he said in Rabat, Morocco. “The Republican People’s Party [CHP] and other dissidents have a hand in these events.”