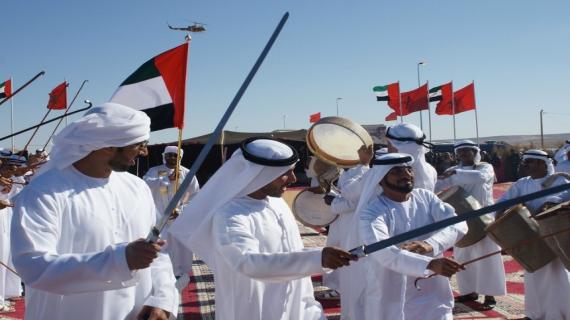 The United Arab Emirates is participating from the 13th until the 18th, 2016, in the activities of the 12th edition of the Tan-Tan Moussem Festival in the Kingdom of Morocco. The Festival is recognised by the UNESCO as a Masterpiece of the Oral and Intangible Heritage of Humanity. It celebrates the Bedouin culture and the perspicacity of the locals through the preservation of the various dimensions of the daily life as a means of sustainable development.

Overseen by the Cultural Programs and Heritage Festivals Committee – Abu Dhabi, the large Emirati participation comes to boost the cultural cooperation between the United Arab Emirates (UAE) and the various countries of the world. The objective consists in the strengthening the historical and cultural bonds between the countries of the Gulf Cooperation Council (GCC) and the Arab Maghreb region. Though is participation in the Tan-Tan Festival, the UAE also aspires to deliver a cultural and humanitarian message that bears the fragrance of authentic Emirati heritage.

The UAE and the Kingdom of Morocco share a common interest in culture and heritage. The two countries are bound together by brotherly bonds, and historical ties that date back to many years ago. They boast common and converging customs and traditions in the field of heritage and culture, in addition to a substantial interest in the preservation of intangible heritage and popular culture.

“An active Emirati participation in the activities of the Tan-Tan Moussem Festival is quite important as it boosts cultural dialogue and reinforces exchange between the main players in the field of authentic Bedouin heritage and culture. This participation serves and strengthens the distinguished cultural ties between the UAE and the brotherly Kingdom of Morocco,” said His Faris Khalaf Al Mazrouei, Chairman of the Cultural Programs and Heritage Festivals Committee – Abu Dhabi.

Al Mazrouei stressed the need to promote and shed light on the local Emirati heritage at all international festivals and events.

“The Tan-Tan Moussem Festival is widely recognised as an illustrious cultural event in North Africa as it has become capable of attracting diverse forms of Bedouin culture, growing, hence, into a unique platform for the gathering of different Arab cultures in one crucible of heritage and art,” he said.

“The Tan-Tan Moussem Festival constitutes a unique opportunity to promote the Emirati efforts that have been made to ensure the inscription of elements of non-material heritage on the UNESCO List of Intangible Cultural Heritage. The Emirati participation in the two previous editions was remarkably effective as it succeeded in drawing the interest of a large public,” said Abdullah Butti Al Qubaisi, Director of Projects Management and Communication at the Cultural Programs and Heritage Festivals Committee – Abu Dhabi.

The Cultural Programs and Heritage Festivals Committee – Abu Dhabi oversees the participation of the Emirati delegation at the Tan-Tan Festival, in cooperation with a number of state and official bodies that are concerned with the preservation of the cultural heritage, notably: The Abu Dhabi Tourism & Culture Authority, the General Women's Union, the Camel Racing Federation, and the Advanced Scientific Group (The Veterinary Research Centre).

The Abu Dhabi Popular Arts Troupe at the Committee will shed light on the diverse performance arts that are practised in the UAE. The Poetry Academy will present evenings of Nabati poetry. On its part, the Camel Racing Federation will organise camel competitions and heritage milking contests (Mahaleb), as part of its efforts to promote and preserve Emirati heritage.

At the pavilion of the Committee, several elements of the Emirati culture will be highlighted. The pavilion also includes an exhibit where important Emirati cultural, scientific and heritage publications will be on display. Published by the Tourism & Culture Authority and the Poetry Academy, these books will be donated to the Tan-Tan Library, within the framework of the celebration of the Year of Reading.

Several elements of the Emirati heritage will be presented in an exciting way, notably the camel equipment, Al Sadu, the Journey of Hajj and Water, Al Taghruda, Al Ayala, the Bedouin History in the UAE, and a Photography Exhibit about the bilateral Emirati-Moroccan relations.

The traditional heritage tents draw attention to a number of Emirati crafts. At the Craftswomen Market, visitors will discover the art of cooking and popular dishes, the Henna art, as well as other traditional crafts.

In September 2004, the Tan-Tan Cultural Festival was inscribed on the UNESCO List of Intangible Cultural Heritage to ensure its safeguard and maintain its annual organisation.

Since 2014, the participation of the UAE has added a qualitative dimension to this one-week cultural event that has been capturing the different aspects of desert life, its customs and traditions.