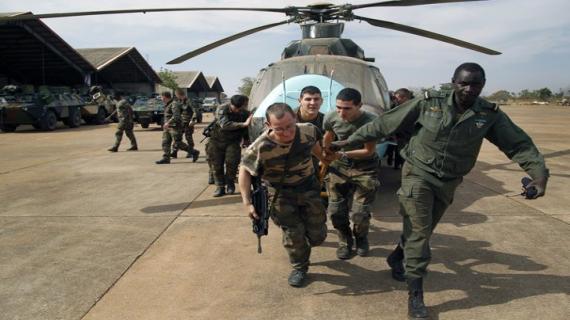 An unspecified number of Americans were taken hostage by Islamist guerrillas early Wednesday in a brazen attack on a remote gas-production facility in Algeria, the U.S. State Department said.

The attack reportedly resulted in the death of two people and the capture of several dozen foreign workers, most of them European, officials in Europe and in Algeria told news agencies. Algeria’s news service said troops had surrounded the facility, the Associated Press reported.

Al-Qaeda in the Islamic Maghreb claimed responsibility for the attack and said it was retaliation for Algeria’s decision to allow France to use its airspace to send warplanes to neighboring Mali, where French forces have been conducting airstrikes and support operations since last week to aid Malian troops in their battle against Islamic insurgents.

“Algeria’s participation in the war on the side of France betrays the blood of the Algerian martyrs who fell in the fight against the French occupation,” the Nouakchott News Agency quoted a spokesman from the Masked Brigade, an group that is part of al-Qaeda in the Islamic Magreb, as saying.

Secretary of State Hillary Rodham Clinton had spoken about the situation to the U.S. ambassador in Algeria and to the Algerian prime minister, State Department spokeswoman Victoria Nuland said. Nuland refused to confirm claims by the al-Qaeda group that there were a total of 41 hostages, seven of them American.

In Mali, meanwhile, French troops in armored vehicles and machine-gun-mounted pickups were moving north toward the beleaguered town of Diabaly, setting the stage for what seemed likely to be their first major engagement on the ground since President Francois Hollande ordered the military intervention there six days ago.

The troop movements were recorded by journalists on the scene. Some reports said French special forces advisers were already in Diabaly, battling alongside Malian soldiers.

An all-out attack on the town by French ground forces would sharply raise the risk of casualties and of criticism of the operation from within France, where leaders across the political spectrum so far have expressed support. Fighting would probably have to proceed at close quarters, house to house, robbing the French forces of the overwhelming technological advantage they have had while their role was limited to airstrikes and attempts to buck up the disorganized Malian army.

It would be a dramatic change from the 2011 Libya intervention, in which no French casualties were reported despite months of bombing and the presence on the ground of an unknown number of special forces.

In what could be a taste of things to come, former French president Valery Giscard d’Estaing warned Hollande on Wednesday against letting the French intervention evolve into a “neocolonialist” type of action. “France should limit itself strictly to its logistical support to African forces,” he told the newspaper Le Monde.

Details of the attack on the gas facility in eastern Algeria remained murky hours later. Armed assailants burst into the facility at In Amenas, about 800 miles southeast of Algiers, the capital, according to Britain’s BP, which helps operate the site, and the British Foreign Ministry. The remote facility, on the border with Libya, is operated by BP, Norway’s Statoil and Sonatrach, the Algerian state oil company.

BP said a group of “unidentified armed people” attacked and occupied the facility at 5 a.m. and, as of late afternoon, were still occupying the site. The company said it had not confirmed the “identity or intention of the people occupying the site.”

“We do not yet have confirmed information on the status of the personnel at the site but believe some are being held by the occupiers,” the company said in a statement issued in London.

Reports quoting Algerian security sources in the region varied considerably; some said that a British security guard was killed and that several Japanese and other Europeans were taken hostage. The Irish deputy prime minister, Eamon Gilmore, demanded the release of an Irish hostage, suggesting he was among those being held.

The Algerian Interior Ministry said at least one person was dead, without specifying the nationality.

Since the French military intervention in Mali began Friday, al-Qaeda in the Islamic Maghreb and other Islamist militias have issued a number of threats, saying Hollande would be made to pay for his actions. Al-Qaeda in the Islamic Maghreb was started in Algeria in the late 1990s. It has turned Mali’s vast northern stretches into a haven for guerillas and terror organizations.

Wilgoren reported from Washington. Anthony Faiola in London contributed to this report.