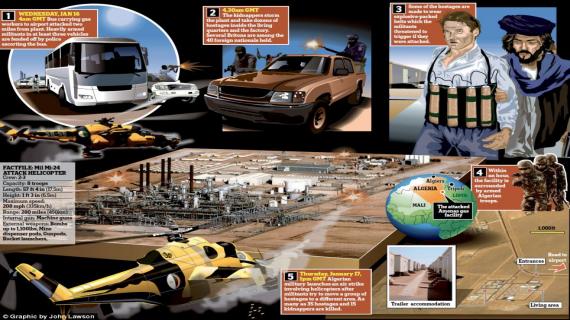 CAIRO -- International officials Friday questioned the Algerian military's storming of a natural gas plant in the Sahara Desert that led to a firefight with Islamic militants and the deaths of an undisclosed number of hostages, including Westerners and Asians.

There was no clear indication of exactly how many hostages were killed or wounded in Thursday's assault. Conflicting reports continued to emerge. The Algerian government said the army raid had ended while the British Foreign Office said the "terrorist incident remains ongoing."

[Updated, 9:22 a.m. Jan. 18: Algerian state-run media reported Friday that about 650 hostages were freed in the raid to retake the plant. It said more than 60 foreigners -- about half of all foreigners held -- were among those who were freed or escaped.

The state-run news agency said the military was seeking a "peaceful end" to the incident.]

The chaos along the Algerian-Libyan border left the U.S., Britain, France and other countries worried about their citizens while questioning what appeared to be Algeria's rushed strike against the kidnappers without consulting foreign capitals. One unconfirmed media report suggested that 35 foreign hostages were killed by gunfire from Algerian helicopters during the raid.

"The action of Algerian forces was regrettable," said Japanese Chief Cabinet Secretary Yoshihide Suga. British Prime Minister David Cameron was perturbed Thursday over not being informed of the Algerian operation to rout 20 to 60 heavily armed militants who had seized the gas complex in retaliation for French airstrikes on Islamist rebels in neighboring Mali.

Initial reports suggest that more than 100 hostages, including at least 41 foreigners, were in the compound. There were reports Friday that Algerian troops and Special Forces were still encircling the plant. Reuters reported that as many as 30 hostages and 11 militants were killed. It was also unclear how many hostages remained at the site or had escaped into the desert.

The British government told its people to "be prepared for bad news."

But the Algerian government, which fought a civil war with Islamist militants that killed more than 100,000 people in the 1990s, sought to justify its raid on the gas complex at In Amenas, which is run by BP; Statoil, a Norwegian firm; and Sonatrach, the Algerian national oil company

The assault on the compound dramatically changed the dynamics of Algeria's decades-long campaign against radicals. Militants had rarely, if ever, targeted oil and gas operations, even during the civil war when few rules applied amid beheadings and massacres. The militant attack was a direct strike at the government and the nation's economic and political stability.

An Al Qaeda-linked group, known as the Signed-in-Blood Battalion, claimed responsibility for the attack. Its leader, Mokhtar Belmokhtar, a mercurial, one-eyed smuggler, kidnapper and jihadist, has been backing Islamist rebels in Mali in a war to overthrow the government. France last week bombed rebel positions and has sent troops to Mali to stop rebel advances.

The overrunning of the gas complex raised questions about Algeria's ability to secure its rich oil and gas fields. It also suggested that Islamic extremism has been revived across the lawless deserts stretching from Mali and across North Africa.

But on Friday international leaders said much about the events at the plant remained fluid and confusing.

"Parts of the plant are under Algerian authorities' control, and other parts are not. This information is changing by the hour," Norwegian Foreign Minister Espen Barth Eide told the BBC.