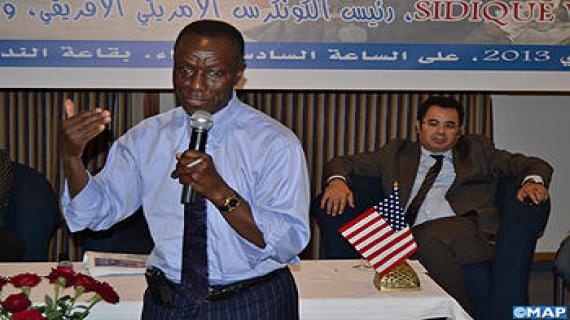 United African Congress (UAC), a leading organization of the African diaspora in the United States of America, pleaded for the Moroccan Sahara.

As a reminder, unlike the Polisario remains fixed in its position by continuing to focus the impossible option of a referendum on self-determination since 2008, Morocco has put on the table of the UN-led negotiations, a proposal to broad autonomy for the Sahara as a political solution to the old Western Sahara conflict.

The President of the UAC, Sidique Wai said Saturday in Tangier, his organization will work on this basis, to "defend the cause of the territorial integrity of Morocco and the Moroccan Sahara to the American public."

Sidique Wai, who was speaking at a discussion meeting organized by the section of the Tangier-Tetouan Authenticity and Modernity Party (PAM-opposition), around the Sahara issue, reiterated the position of the UAC for the Moroccan Sahara.

The UAC is a non-profit organization based in New York City, which represents the interests of a community of Americans originating from strong Africa 3.5 million residents including New York and New Jersey.

This African-American organization "campaigning for a united Africa and opposed the moves to the fragmentation of countries" of the black continent, said its president, reiterating the way, the solidarity of the UAC with Moroccan Sahrawis sequestered in camps Tindouf in Algeria.

Relavant the Moroccan Sahara issue remains largely unknown to the general public in the United States, called Wai assistance in more effort to communicate with the public and the American media, the facts in the southern provinces of Morocco and the conditions of confinement of thousands of Moroccan Sahrawis in the Tindouf camps.

The UAC, he assured, is ready to provide its support and cooperation in all initiatives in this direction, adding that it is time to end the artificial conflict over the Moroccan Sahara and the suffering of people in the camps Tindouf