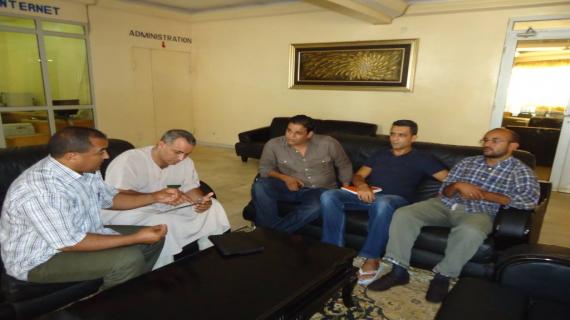 Morocco is hosting as of Monday guests who are more often than not unwelcome on Moroccan soil. This time however, the aim of their visit is to try to contribute to the settlement process of the Western Sahara conflict.

Four members of the Polisario Youth Union are actually part of a delegation of the International Union of Socialist Youth (IUSY) which is visiting Morocco at the invitation of the Chabiba Ittihadia – Youth association of the opposition Socialist Union of Popular Forces (USFP.) Besides Rabat, the delegation will also visit three southern provinces.

The visiting Polisario Youth Union members are Salma Moussa, secretary general of the Union and member of its General Secretariat, El Mahfoud Sellama, head of the Foreign Relations Committee of the union and union members, El Aziza Yahdih and Hemmad Sellama Mahfoud.

The IUSY Delegation is scheduled to hold a series of talks with many Moroccan officials, including the presidents of the National Human Rights Council (CNDH), the Economic and Social Council and the Royal Advisory Council for Saharan Affairs (CORCAS) as well as with leaders of the USFP.

After Rabat, the delegation will fly to Laayoune, Dakhla and Boujdour to meet local associations’ members, local officials and elected representatives as well as delegates of pro-independence militants. The delegation trip will end with a stopover in Algiers and a detour in the Tindouf camps.

According to a source close to the Chabiba Ittihadia, the purpose of the visit is to explore ways of a possible contribution of the socialist youth to the settlement process of the Sahara issue.

Negotiations are currently stalled. The Polisario leaders do not float any alternatives. They continue to cling blindly to the option of a self-determination referendum although the option is deemed unworkable and impossible and reject the Morocco-proposed autonomy plan, described as “serious and credible” by the international community, including the USA and France, both permanent members of the UN Security Council.

The question is whether after their first visit in the southern provinces of the kingdom, the Polisario youth representatives will change their vision. This is not so sure, but the experience is worth trying.