Who says Algerian civil society does not support the Polisario? 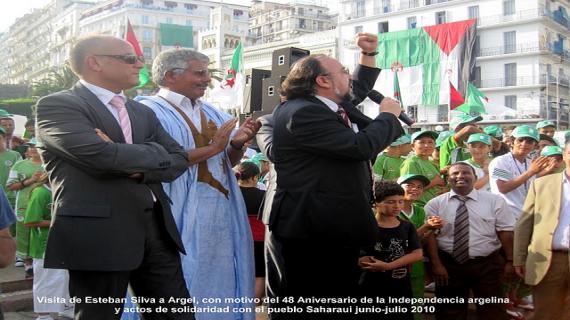 As I was listening to the radio this morning, shifting from one radio station to another searching for a worth-hearing piece of music or broadcasting program, I came across an Algerian Radio station that was covering the issue of the Moroccan Sahara from the perspective of Algerian political leaders and civil society. Without a doubt, it was a first-rate opportunity to listen to the arguments and attitudes of the other side vis-à-vis this thorny matter which has lately witnessed a surprising twist specifically due to the United States’ most recent announcement concerning elaborating the missions of MINURSO in the Moroccan Sahara.

As a Moroccan, I’ve always been well aware of the Algerian stance toward the Moroccan Sahara. Algeria blindly supports the Polisario and it everlastingly advocates for the right of the Saharan population to obtain full independence from Moroccan sovereignty. I also mistakenly thought that only the Algerian government supports the Polisario, while civil society gives no importance to this issue.

To my amazement, I was traumatized when listening to the individuals in that broadcasting program accuse Morocco of being a colonizing nation and the Moroccan Sahara a colonized territory. They also untruthfully justified and rationalized Algeria’s staunch-defending stand towards supporting the Saharan people’s pursuit for autonomy Morocco and rationalized Algeria’s blind support for Polisario as a matter of human rights. They alleged that Algeria is simply defending the rights of people to decide their own destiny, the same way it did with West Timor issue. According to these people, whom Morocco once helped defeat the French, Algeria is merely following the declaration of human rights, and if Algeria were to side with Morocco, it would imply a clear violation of this declaration.

An outsider listening to their claims might even think that Algeria is the most politically stable and democratic nation  in the world. Needless to say, Algeria has ulterior purposes behind its support for the fabricated republic of Polisario, and this  is clear from its over- concern towards this issue. Apparently, Algeria supports Polisario because it wants to have a getaway to the Atlantic ocean. By supporting the enemies of Moroccan’s territorial unity, Algeria aspires to get retaliation from Morocco over its disgraceful loss during the Sand war that took place in 1963 between the two countries over borders. Morocco won this war and it seems that Algerians still bitterly remember this incident and longs to find an occasion to take revenge from Morocco.

In addition, the guests of this Algerian radio program wondered why Morocco is tenacious over the Western Sahara and why the Saharan citizens are not allowed to decide their own destiny whether to be Moroccan citizens under the Moroccan sovereignty or obtain their independence. They asserted that the Moroccan Sahara has been colonized since the 1884, and that the Spanish colonizers did not give it back to Morocco, and that Morocco imposed its hegemony over these territories by force after the Spanish withdrew from the region.

They also maintained that Morocco has had many failures, rioting, and socio-economic woes within the country. I detected an odor of joy and satisfaction from these guests when they referred to the latest twist concerning the issue of Sahara. And how the United States, which is believed to be a strategic ally of Morocco and has always supported Morocco’s national cause and the proposal for self-government in the southern provinces, has turned its back on Morocco, and it is well in the way of supporting the right of Saharan people to decide on their destiny.

One of those guests on this program suggested that France would do as United States has done and turn its back to Morocco as well. Upon hearing this, many queries began running through my mind as I tried to speculate and predict what would happen if Morocco were to be forced to surrender the Western Sahara to the Polisario.

Indeed it is a terrifying thought, yet such scenarios should be taken into account simply because in politics there is no eternal friends or perpetual foes—everything is interests-dependent. A country, which is an ally today can become an enemy tomorrow depending on its own interests.