World Refugee Day and the tragedy of Tindouf 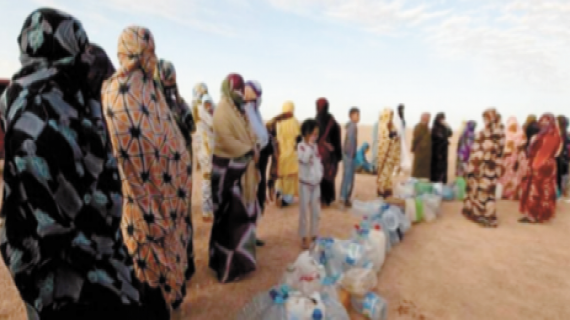 The World Refugee Day is held every year on 20 June and is a time to recognise the resilience of forcibly displaced people throughout the world. None more relevant to this day are the 100,000 saharawi refugees who are effectively detained in the Frente Polasario run camps in Tindouf, Algeria.

This author appreciates the great work done by UNHCR in creating a favourable protection environment for the people detained in the Tindouf Camp, however the need for a sustainable solution for the refugees must be a priority, as the status quo cannot be maintained as such.

The protracted nature of the situation of Sahrawi refugees detained in camps near Tindouf is taking a toll, particularly among the younger generations. A new generation of people had been trying to improve their situation in the Tindouf camp under great personal risk from Frente Polisario.  They are striving to end nepotism and rotating leadership prevailing in the camps.  That they should come under threats from those running the camps was understandable, but what was surprising was the United Nations’ refusal to engage with them. Young people are most at risk to be influenced by Jihadist and turning a blind eye to their demand make make them prone to falling in the traps of this scourge. Let’s not forget that increased crime had made Tindouf a refuge for jihadists forced to flee from northern Mali, following a crackdown on Islamist extremists by France.

The UN Security Council time and time again has underscored the worrisome situation in the Tindouf camps, despite the provision of humanitarian assistance by the European Union and other donors. The question remained as to why that assistance had not improved conditions there. It is now clear that much of it had been diverted, something that had been the subject of speculation for several years. A report of the European office shed light on the wide scale of the diversion of aid by the Frente Polisario. Such aid should be monitored and properly distributed under a better governance regime. The World Food Programme (WFP) provided 125,000 general food rations per month, but those living there remained malnourished as Frente Polisario leaders systematically took possession of the supplies and then siphoned off portions for illicit sale while inflating refugee numbers. This author joins the chorus of many commentators in urging the international community to conduct a thorough investigation to prevent further destabilization in the wider region.

Various independent commentators have highlighted the effort made by Morocco to empower the Saharan people in terms of economic, human development and job creation, with recent examples include building a major desalination plant in Dakhla, the establishment of industrial zones in Laayoun, El Marsa and Boujdour, guaranteed freedom to do business and liberty of circulation of goods and persons in Western Sahara. Showcasing the company Phosboucraa, the largest employer in the Sahara, some commentators have highlighted the progress on job creation and non-discrimination and promotion of gender equality, women’s access to employment and primary education for children.

Given the recent progress in Western Sahara, why is it people the people in Tindouf still live in an environment of systematic undermining of human rights and in flagrant breach of international conventions? The tragedy of Tindouf is the shared responsibility of Algeria and the Office of the United Nations High Commissioner for Refugees (UNHCR). It is in the overwhelming interest of all states to resolve the issue – only a peaceful political solution where the people of Tindouf can enjoy their rights and dignity in peace.