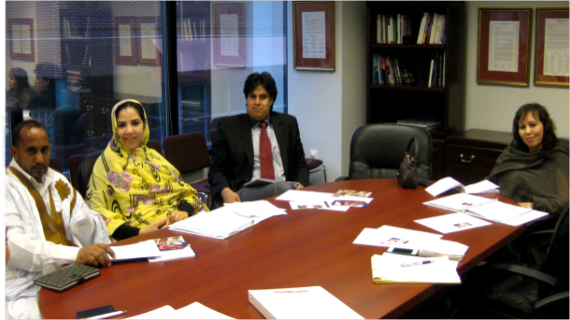 A delegation of Sahrawi elected and civil-society leaders traveled to Washington this week from Moroccan Sahara to speak with US lawmakers, human rights activists, and others about the challenges and opportunities facing the region, and what Americans can do to help. The Sahara/Sahel region has been the focus of increased international attention with the French-led intervention in nearby Mali, which has given new urgency to resolving the decades-long Western Sahara dispute.

The Sahrawi leaders delegation specifically called attention to human rights violations in the Polisario-run refugee camps near Tindouf, Algeria and appealed for help to end the suffering of those held by the Polisario for several decades.  The visit, which coincides with World Refugee Day, was an opportunity for delegation member Mohamed Cheikh Ismaili to share the humanitarian tragedy of his brother Mustapha Salma who began a hunger strike on May 20 to protest the Polisario’s denial of his right to rejoin his family in the camps.

“It is time to end the suffering and exile of Mustapha Salma Ould Sidi Mouloud,” said Mohamed Cheikh Ismaili, brother of the Sahrawi human rights activist and former police chief of the Polisario-run refugee camps. In 2010, Mustapha Salma was imprisoned for 72 days by the Polisario for expressing his support for Morocco’s compromise autonomy initiative to end the 36-year Western Sahara conflict. After an international human rights outcry, he was released to the UN High Commissioner of Refugees (UNHCR) in Mauritania. But for more than two years now he has been denied the papers necessary to leave and rejoin his wife and five children, who remain trapped in the Polisario-run camps. On May 20, he began a hunger strike and yesterday was taken to a hospital in Nouakchott, Mauritania.  He expressed his thanks to his interlocutors in Washington for calling US public attention to this human tragedy.

M. Salma began hunger strike May 20. Yesterday he was taken to a hospital in Nouakchott, Mauritania.

For her part, Rakiya Eddarhem, a Sahrawi Member of Morocco’s Parliament, representing Laayoune and the Socialist Union of Popular Forces Party (USFP) called on UNHCR “to help Mustapha Salma so he can reunite with his family and obtain his travel documents. Mustapha Salma’s plight is truly tragic. Sadly, there are thousands more like him. Most of us have relatives in the Polisario-run camps who want to leave but have no freedom to do so. Their rights are denied and futures held hostage by the same Polisario leaders who claim to be their ‘sole legitimate representatives.’ But they haven’t been elected by the Sahrawi people, and they certainly aren’t serving their interests. It is a stark contrast with the situation in Moroccan Sahara.”

“Our lives aren’t perfect, but we have rights, we are Moroccans, and we are moving forward,” said Hajbouha Zoubir, founding member of AmFED (Moroccan Association of Women’s Development) in Laayoune and currently working on the CESE (Economic, Social & Environmental Council), a consultative project with the people in Moroccan Sahara to address social, economic and other development issues to improve quality of life.

A Moroccan businesswoman and advocate for Sahrawi women’s rights, Zoubir agreed that women still face challenges, “but we have a higher standard of living, and higher rates of voter participation, than the rest of Morocco.  What we need is more training and access to services to take on our new responsibilities with Morocco’s regionalization initiative. The US and international community can be a big help.”

“We have been very encouraged by the reception we have received in Washington,” said Hamdi Cherifi, a well-known human rights activist from Laayoune and doctoral candidate on the multidimensional aspects of conflict management, including policy, politics, and human rights. “Morocco and the US have a long history of friendship. Americans want to help,” he said. “And we are all concerned about the growing instability in the Sahara/Sahel region. We are all interested in helping to make Morocco and its Sahara provinces a positive example for development and change in the region.”