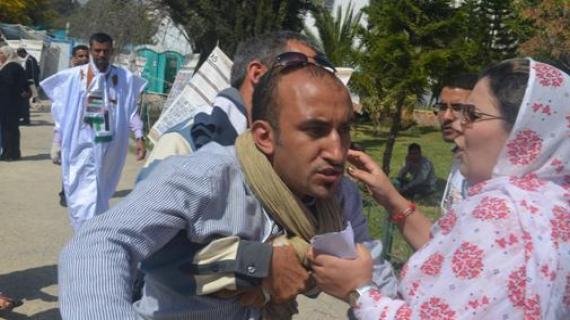 Polisario supporters engaged in one more violent episode against Moroccan participants at the World Social Forum held in Tunis, for defending of the Moroccan sovereignty over the Sahara during discussions on the issue in Tunisia.

On Friday evening, a group of Algerian nationals and supporters of the Polisario attacked a group of Moroccan journalists and civil society activists who have been representing Morocco in this year’s World Social Forum held in Tunis.

Sources cited by MAP news agency affirmed that some Moroccan journalists, namely Hisham Madrawi, from the weekly Sahraa Maghribia and Maroc News, and Khaled Alsti, from the daily Tajdid, were subject to harassment and threats from “a group of Algerian nationals and Polisario separatists.”

The offenders apparently attempted to snatch the Moroccan journalists’ cameras as they were recording a discussion among Moroccan, Tunisian and international social activists on the Sahara issue.

Witnesses told MAP that a group of Algerians, who were backed up by a number of Polisario separatists, harassed and insulted the Moroccan nationals because they were arguing in support of Morocco’s sovereignty over the Sahara.

The sources pointed out that the attacks on Moroccan representatives took place as two separate occurrences at Al Manar university campus, north of the capital.

Immediately after the incident, the alleged victims of the attacks headed directly to a security center adjacent to the university campus, where they filled complaint against their harassers.

Moroccan journalists who participated in the coverage of the WSF event issued an official statement in which they expressed their “reprobation of this cowardly attack.”

The victims firmly requested more security from the organizing committee for Moroccan journalists, civil society representatives and other participants.

The statement issued by the Moroccan journalists called on Tunisian officials to “open investigations to identify and punish those outlaws, affirming their readiness to provide Tunisian security officials with videos and pictures of the occurrences.”

A press conference was organized today in order to allow the victims to share details about the attacks.

A Moroccan social activist from Belgium and two women representatives of the Sahara region were subject to a similar attack by similar supporters of the Polisario .

Mr. Jalal Nali, president of the Mediterranean Centre for Development and Peace in Belgium, told MAP that he and two female Moroccan activists were subject to “barbaric” attacks from representatives of the Polisario and Algeria, after sharing their testimonies on the Sahara issue.

Among the victims of these attacks was Moroccan Aicha Azz who suffered a serious injury to her right leg.