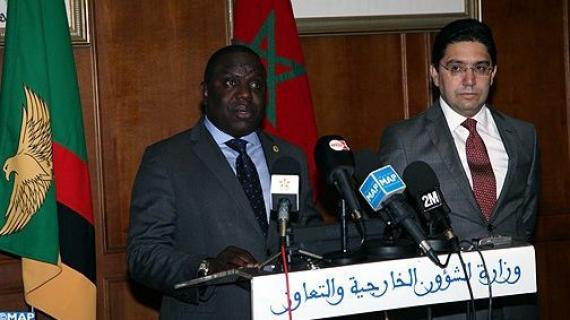 The Republic of Zambia decided to withdraw its recognition of the Sahrawi Arab Democratic Republic, Zambian Foreign Minister Kabinga J. Pande announced on Saturday in Rabat.

Speaking at a joint press conference with Foreign Mnister Taib Fassi Fihri, Kabinga said that "the Republic of Zambia actually withdrew its recognition of the SADR on March 29, 2011”.

Kabinga’s visit to the Kingdom falls within the framework of strengthening political dialogue and promoting bilateral relations, notably at the economic, technical and cultural levels.

Meanwhile, Morocco’s Communications Minister Khalid Naciri said Thursday that the international public opinion is discovering every day the reality of the separatist Polisario Front's erroneous image to be the only legitimate representative of the "Saharawi people".

Commenting, at a press briefing after the weekly cabinet meeting, on the establishment in Paris of a party to defend the rights of the Saharawi people, alternative to the polisario, Naciri said that the international public opinion gradually discovers the realities that Morocco has always said since 1973, namely that the polisario has nothing to do with the misleading image to be the legitimate representative of what it calls the "Sahrawi people" which is part of the Moroccan people.

News from the Tindouf camps reveals that several Saharawi parties want to get rid of this stereotypical image circulated through the media by the Algeria-backed polisario in order to serve geopolitical agendas in the Maghreb region, he pointed out.

French Foreign Minister Alain Juppe said on Wednesday that Morocco has made "significant efforts," mainly through proposing the autonomy plan to end the Western Sahara conflict.

"Morocco has made significant efforts by proposing a statute of autonomy that enables moving ahead in the direction desired by the United Nations," Juppe said during a debate at the National Assembly on "Europe and the Mediterranean."

Juppe stressed that "further steps are being taken by the Moroccan government to monitor respect for human rights in this territory.”

We also “encouraged” the Moroccan authorities “to move forward” in this regard, he underlined.

On the Sahara issue, Juppe said, “Our position is known. It is quite clear. I have already reaffirmed it this morning to the Moroccan Foreign Minister.”

At a meeting with his Moroccan peer, Juppe said that the autonomy proposal is a “basis for serious and credible negotiations” to end the Sahara dispute.

Juppe added, before the French deputies, that “the status quo is untenable and we continue to support Morocco’s efforts.”