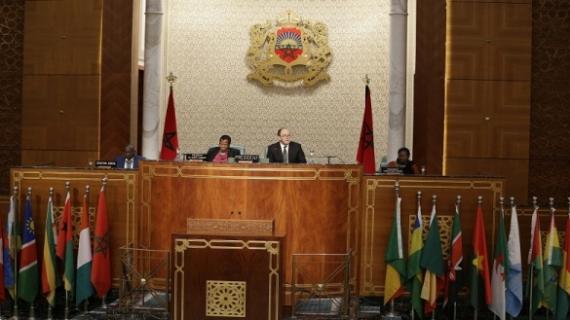 The African Parliamentary Union (APU) announced its support for Morocco’s reinstatement in the African Union (AU) Wednesday night at the closing of the continental organization’s meeting in Rabat.

The APU has been carrying out the 39th edition of its conference from the 5th to the 9th of November in Morocco’s capital city.

Mary Ong, delegation head and a member of the Democratic Republic of Congo’s parliament, gave a speech at the event’s closing in which she stated the APU stands “in favor of King Mohammed VI’s initiative regarding the return of the kingdom of Morocco to her family, the African Union.”

“This initiative will enhance current efforts to make Africa united and prosperous,” she added, addressing the inter-parliamentary organization.

Last month, King Mohammed VI completed a tour of three East African countries that have traditionally recognized the Polisario’s sel-proclaimed Sahrawi Arab Democratic Republic (SADR). The state visits ramped up support from AU countries for Morocco’s return to the institution, which the kingdom left in 1984 – when the SADR joined as a full member.

The Moroccan monarch has argued in recent weeks that rejoining the AU would provide the nation an official venue to defend its territorial integrity in issues regarding the contested Western Sahara, which the SADR claims sovereignty over.

Female members of the APU made news on Tuesday when they called for African parliaments to give national agencies that fight human trafficking the tools to perform their responsibilities effectively.

“We should make sure that police officers we send out have been trained, to detect and counter the traffickers. And also be in position to identify the victims and culprits in time,” Rebecca Kadaga, the speaker of the Ugandan parliament said.