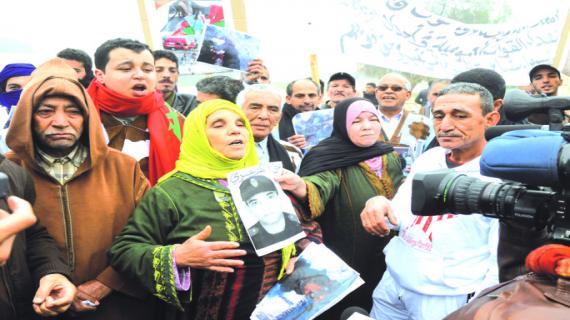 Following a statement issued on Tuesday, in which the NGO ACAT France (Action by Christians for the Abolition of Torture) gave its version of facts concerning the so-called abuses committed as part of the Gdim Izik Trial before the Rabat appeal court, the NGO of families and friends of Gdim Izik victims immediately reacted, denouncing an untruthful version spread knowingly on the occasion of the visit to Morocco by French President Emmanuel Macron.

In a statement, received on Wednesday by MAP, the NGO of families and friends of victims of abuses committed at the Gdim Izik camp on Nov. 8, 2010, said that it was informed of the statement dated June 13, 2017 and issued by the ACAT on its website as well as of the letter sent to the UN special rapporteurs.

The NGO of families and friends of Gdeim Izik victims noted that the ACAT has been spreading for the past months lies and untruthful allegations for hidden motifs concerning the Gdeim Izik trial at the Rabat appeal court, and voiced its surprise at this attitude and wanted to shed light on this for the public opinion.

As for the withdrawal of French lawyers on May 16, 2017, the ACAT affirmed that the judge was the one who made their withdrawal official, and that of French fellow lawyer Joseph Breham, and ordered their expulsion from the hearing.

On May 17, 2017, Madame Legeay, ACAT official in charge of case monitoring, affirmed that two French lawyers, who had asked for time for reflection, were dismissed by the judge who ordered their expulsion from the hearing.

The NGO of families and friends of Gdim Izik victims, which attended all trial hearings, underlined that "things happened in very different way." “In fact, when the two French lawyers attending the audience announced their intention to withdraw on May 16, 2017, they had obtained from the judge the possibility to leave the appeal court building to consult with Joseph Breham over the phone. Then, they communicated their decision to withdraw from the defense of the defendants,” the NGO noted.

“It is only after the judge had taken note of their decision -that is, when they were no longer lawyers of the defendants- that they had irregularly attempted to speak and provoke an incident. The judge asked them to take their seats next to the public, without any violence being committed against them,” the NGO added.

Concerning the letter sent to the UN special rapporteurs by ACAT and which affirms that Asfari was abducted on November 7, 2010, the NGO of the families and friends of the victims said that “during interrogations of two witnesses cited by Asfari himself, the latter gave two versions contradicting his own allegations as to the place and circumstances of this so-called abduction, while several concurring testimonies confirmed that he was present at the camp on November 7 and the morning of November 8, 2010, the date on which he was arrested.”

Lastly, and as regards the acts of alleged torture committed against the accused, and which were recounted in the letter sent to the UN special rapporteurs, it should be noted that their existence has not been demonstrated by the expertise carried out at the request of the Court of appeal in accordance with the Istanbul Protocol.

“Every well-meaning person must be wondering whether it is possible to put any credibility into allegations that only appeared several years after the events, whereas none of the suspects had previously filed any complaint before the Moroccan courts,” the statement noted.

“Is this anything other than a defense strategy aimed at preventing the Court of appeal of Rabat-Salé from examining the actions of the defendants in a calm manner?,” the NGO wondered.

“The NGO of the families and friends of the victims of Gdim Izik intends to react by all means, including judicial ones, against this attempt unworthy of manipulation of public opinion during the visit of President of the French Republic, Emmanuel Macron, to the Kingdom of Morocco,” the same source noted, adding that it will also make sure to refer the matter to the UN special rapporteurs in order to assert the rights of the victims' families to the truth and reparation.