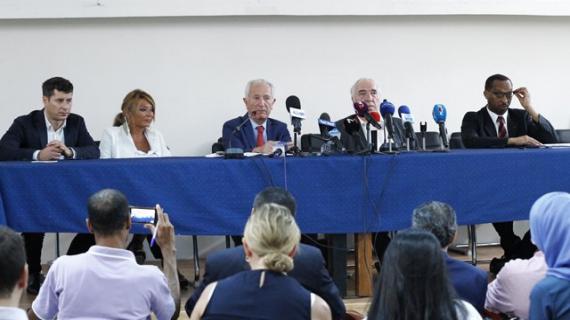 The sentences handed down, on Wednesday by The criminal court of the Salé Appeal Court, to the accused in the events related to the dismantling of the Gdim Izik camp , are "fair and balanced," said the international observers who attended the hearings of this trial.

The Court has respected the principle of individualization of sentence by deciding to give verdicts ranging from two years to life sentence in this case, underlined the lawyers during a press conference, held in Rabat.

The judicial decision of the Court on this case leaves no doubt as to the relevance of the sentences handed down, said lawyer Pierre Legros, pointing out that the Court examined at all times the facts attributed to each accused without being influenced by the pressures of the defense of the defendants.

Legros, who highlighted the profound significance of the re-trail of this case before an ordinary Court, said that foreign observers who had followed the trial closely for seven months are able to confirm that it was a matter of a "fair" judgment which has respected all the guarantees stipulated in the international Law.

For his part, French lawyer Hubert Seillan said that the decision taken by the Court after seven months was "balanced" taking into account the allegations against the accused, who were charged with the setting up of criminal gangs and violence against the armed forces.

The Court carried out its work in an exemplary manner and examined the facts and not the ideas because we are faced with a criminal trial which should judge criminal facts condemned by the law and not political ideas, Seillan stressed.

"We were with observers from several countries and we were all convinced that this trial was conducted in the best conditions, which resulted in just sentences," said Belgian-Rwandan lawyer André Martin Karongozi.

On his part, Danish lawyer Laue Smidt described the trial of Gdim Izik as "professional", noting that all conditions were met so that the accused, the civil parties and their defenses perform their duties in the best way possible.

The criminal court of the Salé Appeal Court on Wednesday morning gave verdicts ranging from two years to life sentence against the accused in the events related to the dismantling of the Gdim Izik camp.