History : When King Hassan II reached an agreement with Bouteflika on the Western Sahara issue

In 1999, and months after he passed away, King Hassan II reached an agreement with Algerian President Abdelaziz Bouteflika on the Western Sahara conflict, US Department of State document reveals.

In 1999, months before he passed away, the late King Hassan II reached a common ground with Algerian President Abdelaziz Bouteflika on the Western Sahara conflict. The Moroccan-born politician ran, for the first time, for president as an independent candidate.

Although he was, reportedly, supported by the Algerian military, Bouteflika was also backed by the Moroccan sovereign. This unusual rapprochement, between King Hassan II and the future Algerian President, was briefly mentioned in a US Department of State document, drafted and submitted by Rabat’s former ambassador to Washington, Aziz Mekouar.

The document, declassified in May 2017, and quoted earlier this week by former US ambassador to Morocco Edward M. Gabriel, who referred to the high hopes King Hassan II had for the candidacy of Bouteflika and the Western Sahara dispute.

The seven-page document titled «Sahara Policy History», which touches upon the United States’ involvement in the territorial dispute and the classified agreements concluded between Rabat and Washington, reveals that the Moroccan King was ready to drop the idea of a referendum and discuss a solution with Algeria for the Sahara.

According to Mekouar, when King Hassan II discussed the territorial dispute with US representatives, he «seemed intent to await the Algerian election». The sovereign «hoped to engage directly with the leading candidate, Abdelaziz Bouteflika, whom he hoped and believed would become president».

An agreement between Hassan II and Bouteflika

As expected, King Hassan II discussed the dispute and the American approach, urging the Kingdom to abandon the referendum, with Bouteflika. The same source recalls that on July 20th, during a meeting with US Ambassador Gabriel, King Hassan II said that «he had come to an agreement with President Bouteflika».

The Sovereign told the American diplomat that Bouteflika «believed a solution (to the Western Sahara conflict) along the lines of the American proposal was now possible». Unfortunately, the document reveals that «king Hassan died three days later without this change in (Algeria’s) position being made public».

The agreement mentioned by Hassan II suggests that the two leaders held a series of meetings and telephone conversations to discuss the Sahara question before reaching a «solution» to the conflict. A similar agreement was also mentioned by Djallil Lounnas and Nizar Messari in their study «Algeria–Morocco Relations and their Impact on the Maghrebi Regional System» (Menara Working Papers, October 2018). 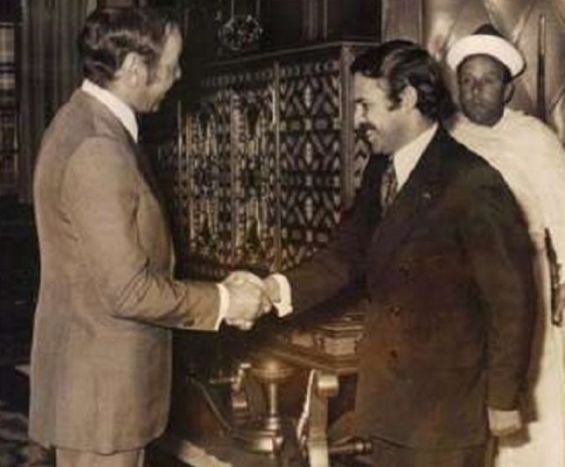 The two researchers said that back in 1975, «then Minister of Foreign Affairs Bouteflika, was to support Rabat in the takeover of the Sahara in exchange for which Morocco would ratify the Ifrane treaty». The study revealed that, months before King Hassan II organized the Green March in 1975, he signed «an understanding with Abdelaziz Bouteflika» in July of the same year in Rabat.

But what the declassified document does not indicate is that the optimism of Hassan II and Bouteflika was so great that the two heads of state were expected to meet in September 1991.

Unfortunately, Bouteflika never met Hassan II as president of the neighboring country. In July 1999, the now 82-year-old President flew to Rabat to attend the funerals of King Hassan II.

Gabriel recalls that Bouteflika called King Mohammed VI a «brother» during the funeral of his father. After the death of King Hassan II, Bouteflika «would prove to have little interest in improving relations with his neighbor».

«In September of 1999, he would send a condescending letter offering his views on how to “manage” Morocco to the newly enthroned King Mohammed VI that would cool the latter’s optimism and lead him to question Bouteflika’s seriousness about overcoming their bilateral differences», concluded the former American ambassador.