Who never dreamed of discovering the new Eldorado, a territory where the forces of nature mix up to create a unique and ideal ecosystem… a place where everything is possible!

Since Endless Summer, Bruce Brown’s movie released 70’s, water addicts travel the world seeking the ideal spot, the perfect wave… and maybe they have found the perfect place not too far from France.

Indeed, it seems that a city in the south of Morocco, called Dakhla, is becoming the first watersport spot in Europe!

Several factors can explain this infatuation since the early 2000’s.

In Dakhla, you have the choice to navigate on the very charming lagoon, between the dunes of the Sahara desert and the ocean.

The water isn’t very deep and the wind on the lagoon is almost always perfectly oriented. We talk about side-onshore wind, as it’s lateral, which means that it’s the ideal wind for navigation.

You’re free to travel along this fantastic sea extended on several kilometers, get carried by the wind and by the fabulous down winds until the Island of the Dragon or the White Dune. You can also try any freestyle moves, from strapless to foil, or you can simply discover kitesurfing for the first time in complete safety.

"It is literally the best spot in the world to start learning how to kitesurf.”

On the seaside, the quality of the waves is very impressive. The spot of Oum Labouir, at the exit of Dakhla welcomes each year the first step of the Kite World Championship. And there is certainly no lack of kitesurf spots around Dakhla. Indeed, you can have the opportunity to discover unusual beaches and high-quality waves, such as the famous beach “La Sarga”, located in the south of the city.

The access to the beach “La Sarga” has been forbidden for a while. However, this dazzling beach has attracted a lot of surfers for several years. The offshore wind brings a glassy aspect with no end that surfers cannot resist to.

Sebastien Deflandre loves this place and kitesurfing. His passion and energy have pushed him to brave the forbidden more than one time. And finally, his efforts did pay off.

After lengthy negotiations, he finally received the legal right to surf the waves and even to set up some bungalows in order to bounce up the adventure of the Ocean Vagabond one more time.

Dakhla is a breathtaking destination where the desert and the ocean meet in a 300Km2 lagoon. During your journey, you will probably run into camels and crabs with one big claw, walking along the beach in front of multiple kitesurf wing displayed over the lagoon.

You will also be able to see many mirages thanks to the contrast between the dunes and the lagoon.

Moroccan food is delicious, and variety is not missing: you can taste tagines, couscous, pastries, mint tea and fresh fruit juices with a secret recipe… And if that’s not enough, you can also be tempted by camel skewers.

The city of Dakhla is very animated at night: it’s very pleasant to take a walk in the city, wander along the lagoon, enjoy a delicious desert or go on a shopping spree.

“Dakhla has become in just a few years the Mecca of kitesurf, with more than 1 000 available beds, 300 days of optimal conditions, it’s the first European spot”

As a former military zone, Dakhla has had a quick and positive evolution from a geopolitical and economic perspective. Indeed, Dakhla has become a must-see destination for tourism, business and perhaps one of the best spots in Occidental Sahara.

Idriss Senussi, originally from Rabat, has discovered Dakhla in 2006. Seduced by its beauty and its potential, he decided to invest on the territory by building a hotel, “Dakhla Attitude” located 35Km away from the main town and surrounded by the sky, the sea and the earth.

The hotel offers a spectacular view over the Island of the Dragon, which is one of the most beautiful kitesurf and downwind spot in the world.

To propel this destination on an international scale, Idriss Senoussi has come up with the idea to organize the first edition of a World Kitesurf Championship in Dakhla in 2009.

It has then been renamed after “Prince Molay El Hassan Kiteboarding World Cup” in 2015. Since then, a lot of events have occurred, among which “La Saharienne”, the first 100 % feminine raid in the desert. Also, to cite but a few: the “Dakhla Ultimate Sahara Trail”, a marathon in the desert, and even the international forum “Crans Montana Africa and Cooperation South-South" that reunites worldwide leaders.

THE 2ND EUROPEAN KITESURF AND BUSINESS SUMMIT WILL TAKE PLACE IN DAKHLA!

The B2B Kite Summit is the meeting point of business and kitesurf. The new edition of the B2B Kite Summit will take place in Dakhla from September 25th to September 29th 2019. For the second time, 300 European entrepreneurs passionate about kitesurfing will meet in Morocco.

The aim is to bring together European entrepreneur clubs such as Kite and Connect or Galion Project in France, Business to Ocean or Real Estate Kite club in Belgium or even the Founder Kite club from Germany… and reunite 300 entrepreneurs in order to do as well as their American brother ACTAI.

The B2B Kite Summit will have two major sponsors: Marjolaine Grondin, founder and CEO of JAM, a chatbot via Messenger with more than ½ million users and Chris Ballois, World Kite Speed Record and a entrepreneur.

This summit is above all a dive in the future, an opportunity to bond and innovate. 300 entrepreneurs, investors and start-uppers from all over Europe will connect with each other for 3 days and will share their knowledge about human, digital and technologies.

Aware that kitesurf is the “new golf”, and that this activity is practiced by numerous CEOs, VCs and start-uppers, the summit has received the support of French companies such as the Data Legal Drive, a SaaS collaborative GDPR governance platform, the mutual insurance group Le Conservateur, the flying company Royal Air Maroc and F ONE, a leader in kitesurf equipment.

This will, without any doubt, allow to make this moment exceptional, the new Hawaii, place of business, where sport and pleasure are perfectly combined. 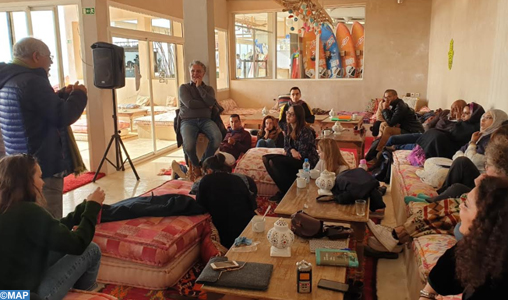 Dakhla and Sahara Featured at Crans Montana Forum; The Life of a Pink Shirt Dress from Morocco
30 March 2017

Sidi Ifni: One of Those Sweet Cocktails
19 August 2015

Sidi Ifni: The door of the Atlantic Sahara
19 August 2015