Portrait of the Superman of Algerian Diplomacy: Smail Chergui 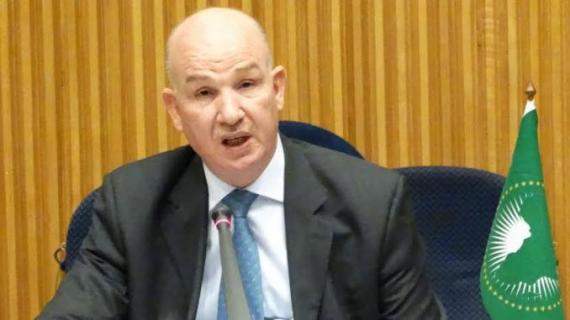 Smail Chergui, former Ambassador of Algeria to Russia, has been holding the position of African Union Commissioner for Peace and Security (PSC) since October 12, 2013.

The AU official had been mentioned in accusations of sexual abuse, abuse of power and administrative abuses, which have led to resignations of AU staff members.

The charges against the Superman of Algerian diplomacy have re-surfaced, according to France-based website “Sahel Intelligence”.

For the website, it is hardly a surprise to see several regions of Africa torn apart by conflicts or plunged in insecurity when the chief of the Peace and Security Commission (SPC), Smail Chergui, is busy, committing all kinds of abuses.

The cases of favoritism in recruitment and promotion to positions of responsibility and gender partiality, reported in a memo signed by 37 women staffers at the SPC, aggravate the records of Smail Chergui, as do cases of sexual abuse involving him.

According to Sahel Intelligence, information circulating in some African countries talk about “Chergui’s fondness for little girls”.

A daughter of one of his housemaids was seen alone with the Algerian diplomat, aged over sixty, in his private apartments. Shortly afterwards, the employee was fired manu militari following a heated argument with Chergui, says the website.

The position of chairman of the AU Peace and Security Commission is a bedrock of the pan-African union. Failing such responsibilities, as does Smail Chergui, is incomprehensible, unless he is there just to serve the interests of his native country, which has been considering the position as its own special preserve since the commission was set up in 2001.