While article 3 of the UN Convention on the Rights of the Child stipulates that “in all actions concerning children, whether undertaken by public or private social welfare institutions, courts of law, administrative authorities or legislative bodies, the best interests of the child shall be a primary consideration”, the Polisario Front is undertaking a deliberate process of child soldiering, under the Algerian cover-up. Recruiting and using children under the age of 15 as soldiers is prohibited under international law, and is defined as a war crime by the International Criminal Court.1 Since its inception in 1975, Sahrawi Tindouf camps, southwest Algeria, have become the epicentre of child soldiers, providing one of the largest concentrations of child recruitment for military purposes in Africa. This is not insignificant, as it dates back to the seventies of the last century when Polisario started taking children from 7 to 14 years old from their families, and forcing them to training on the use and handling of firearms and explosives. 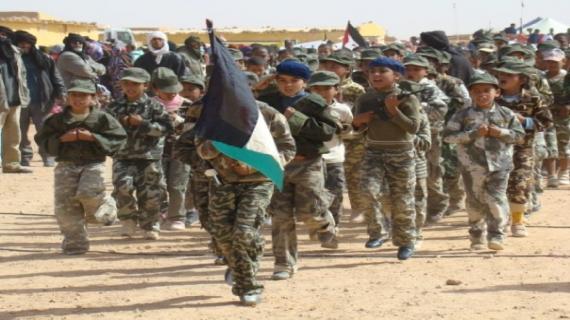 It is essential to understand the general context that gives birth to such a grave violation of human rights in Tindouf camps. The Polisario group is purposefully creating conditions that are conductive to war, and spares not efforts to mobilize all the inhabitants of these camps, including children, towards achieving its plans to ensure readiness to trigger violence in the Sahara, notwithstanding the violations of human rights that might arise from such waroriented mindset. Children constitute the reservoir that Polisario uses to nurture its plans, and the camps under such conditions are becoming an environment where human rights defenders are most likely to encounter uninvestigated abuses.

The silence over employing child soldiers in Tindouf camps is yet to be further scrutinized, as reports from the camps argue that the Polisario is especially cautious to perpetuate the omertà. The recruitment of child soldiers happens involuntarily, with the heavy-handed capture exerted on the families who keep unable to contest the Polisario’s choices, although they go against their consent.

The recruitment of child soldiers coupled with the prevailing impunity regarding the human rights violations committed by Polisario members on the Algerian territory provide a terrain marked by a total disregard of law and a premeditated breach of international conventions in force.

The underlying reasons for Polisario to rely on child soldiers, regardless of their inferior physical power, are gravely violating the basic principles of human rights. For the Polisario, these children are cheap to maintain inside the camps, the same as they are psychologically exploitable for future expansion of the armed groups. These children, with their immature personalities, are wholeheartedly embracing the Polisario’s dictates, without questioning them. The ‘malleable’ personality of these children is an opportunity for the Polisario to fittingly shape their attitudes towards their future, and maintain control over them as a standby force that meets the objectives of the leadership in Tindouf camps.

The Polisario seeks to disengage children from their families, and make them dependent on the Front’s presumed protection and guidance, aiming to transfer their loyalty and sense of belonging from biological to ideological identification. Sahrawi children in the camps are not  provided a good education that capacitates them with critical thinking, but rather forced to an allegiance to the Polisario doctrine against their ‘best interest’.

The responsibility of Algeria

These unlawful acts are unquestionably serious violations of all the provisions of the the UN Convention on the Rights of the Child. They constitute an infringement of the ‘best interest of children’ as explained by the UN Committee on the Rights of the Child, and which entails the necessity to protect the child's views and aspirations, the child's well-being, the family environment, family relations and contact, and the development of the child and her or his gradual transition into adulthood and an independent life, together with his/her protection from ‘situations of vulnerability’.

Sahrawi children in Tindouf refugee camps are living under a double vulnerability, being both children and presumably considered as refugees. For the recruiters from the Polisario, having the upper hand in Tindouf camps gives them easy access to large groups of vulnerable children. While international protective mandates, like the UNHCR, work to respect the humanitarian character of refugee camps, and prohibit refugee participation in military activity in the world, this does not hold true for Sahrawi Tindouf camps. If international law assumes that Sahrawis are refugees, and Algeria, the host country, should fulfil its obligations to protect them, the Algerian government illegally delegates its responsibilities to the Polisario group,3 a non-state actor, and Tindouf camps remain unprotected, thus turning into major recruitment grounds, run by a group that holds no jurisdictional authority on the Algerian Territory.

Child recruitment by Polisario, and all the abusive practices reported by human rights  defenders from the camps, are the result of a complicity between Polisario and the Algerian government who transgresses its international obligations, by allowing such a blatant violation of Sahrawi child rights, bearing serious implications for their physical and emotional well-being.