For decades, Algeria and its creation, the Polisario, have been inflating the numbers of the people held in the South-Western Algerian camps while preventing the UN from carrying out a head-count and maintaining a media blackout on human rights there.

Algeria and the Polisario speak of 165,000 people in the camps and stress on this number in order to receive commensurate aid, most of which ends embezzled by the Polisario and corrupt Algerian officials according to EU reports.

UN Secretary General Antonio Guterres estimated at 90,000 the population held against their will in the Polisario-run camps in south-western Algeria, a figure that is much lower compared to the inflated count put forward by the separatists and their mentor.

People who have fled the grip of the Polisario estimate the number to be much lower than 90,000 amid a growing trend by Algeria of sending non-Sahrawis to the Tindouf camps, which have become the largest detention center in the globe where the people held against their will do not enjoy the internationally recognized rights of refugees and are deprived of their rights to free-movement.

The UN, the international community and Morocco have on multiple occasions called on Algeria to allow a census of the population in the camps. The calls fell on deaf Algerian ears.

The United Nations High Commissioner for Refugees (UNHCR) and the World Food Program (WFP) started to base their assistance on the number of 90,000 as of 2005, even though 35,000 additional rations were added in 2006 following the floods that hit the camps.

The UNHCR had said that they will keep these estimates until a census is conducted.

The EU had decided to reduce aid sent to the Polisario-run camps in a bid to curb humanitarian aid diversion. Following a report by the EU anti-fraud office (OLAF) denouncing the embezzlement of humanitarian aid by the Polisario leadership and Algerian officials, the European Commission decided to cut aid commensurately with the estimated number of 90,000 people instead of the inflated 165,000 people put forward by the Polisario and Algeria in an attempt to sell the idea of the existence of a “Sahrawi People” with a “republic” in exile. 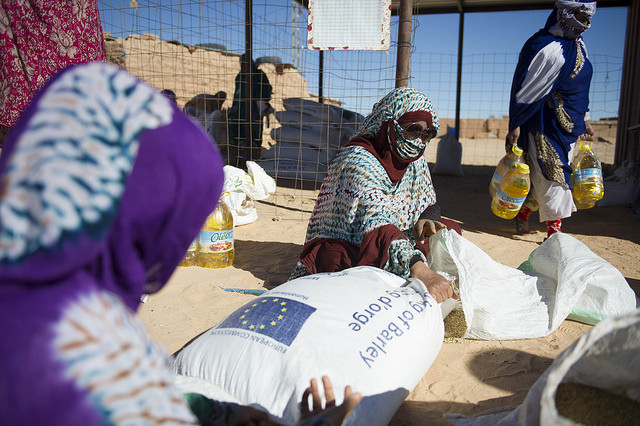