Please do not ask me to be silent. Allow me to breathe (6) 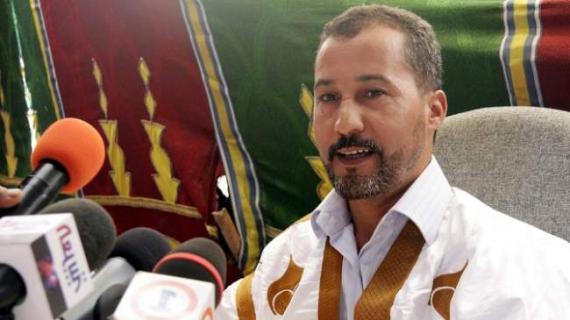 It was the first time in my life that I sat in front of the press, when I held a press conference in Smara.

I had spent the night before the conference thinking about the scene that will happen tomorrow morning. Not that I have a complex with speaking in public speaking, no. What worried me was the situation. I have one bullet, and I have to hit the target. The opportunity may not present itself again and the load is heavy. I left thousands of innocent people suffering behind me, and there seems to be a shadow at the end of the tunnel in whose corridors we have been wandering for decades, it may not even be a light, but we were drowning.. drowning.. a shadow of a bird passing over us could be a hand extending to our aid.

For me, the naive dreamer charged with accumulated years and years of ideological and emotional charging, the problem is not the polisario front. I am one of them and I know them one by one from the president to the gatekeeper. I do not need to ask permission to meet any official, I would just enter if they are not busy and that’s it. They will not be able to stop me from opening a Sahrawi-Sahrawi dialogue.. Trust me, I did not imagine that they would dare !!!! We are all in it, if they want, otherwise we would gather the camp residents at once and ask them to take sides.

We do not have parties, we are tribes and all the Sahrawis know that I would be among the largest side because I am from the most populated tribe. I am not bragging, but in pain and heartbroken. A person killed is just one human less, but a person killed from your own is a part of you falling to never return.. We are the ones who accept condolences the most in the camps. In the heights of "Lahada", which we have never known, there is no more room for our dead ... We have filled it!! Itt will still remain a pilgrimage for us for decades to come even if we depart from it .. There remains a father, mother, brother, sister, uncle... Anyone of us who immigrated willingly or forcibly when they were over twenty will not return..they will not return, people!!! Today we say that the Sahara is ours because the graves of our grandparents there bear witness of it. What about our children? After less than ten years, the grandparents of everyone in the camps will be buried in Algeria??

Even until before the end of the press conference, I thought the problem was Morocco. But imagine that Morocco agreed !!!! Morocco allowed me to hold a press conference attended by most of the Moroccan media spectrum and international news agencies .. Even in a dream I did not imagine it .. I came from a village, the people of which I would call unjust but I could not complain about my people and I would not wish something bad to befall them when the war has not left much of them..

You have wronged me, I was not acting a role in a play as it was marketed to you..I was not providing a service, neither to Morocco, nor to the front, nor to Algeria or China ... I could have said that I came to my land, my country, and that’s it.. I would have a pension, a house and an ID.. and may be I would have been able to  perform Hajj in the house of God, and go back to be buried in my land.. and forget my mother, my brother, my sister, my uncle, my uncle, my childhood friend, and my co-worker.. And forget you, kind, miserable, tired dreamers waiting for Morocco to leave the Sahara so that you can naively enter it on the backs of Algerian tanks!!!!

I wanted to say to Moroccans and Sahrawis alike. Stop the nonsense.

I, the naive dreamer, thought that if the step I am taking next morning would succeed, it would change a lot. So I had to succeed in convincing the journalists who would sit in front of me..I had to make them believe in my message to help me communicate it to the world.

Tomorrow I need to convince the Sahrawis and Moroccans alike.. and what a difficult challenge to address two warring mindsets, trust me that is pure foolishness!!!!

I fell asleep on these worries, and in the morning I found myself sitting with dozens of cameras pointed at me. Press cameras. You have to be careful with your words, your movements, your outfit, etc.

These concerns of success and failure were still clashing in my mind even after being already at that table, and the crowd waiting for one of my relatives sitting with me to finish talking to hear what had to say this unknown person coming from the village holding rifles against us.

The relief came to me from the heavens, my cousin described us as mercenaries in his introduction !!! In his speech, he included the phrase Polisario mercenaries..I am a mercenary !!! His son in the camps is a mercenary !!! His brothers, sisters are mercenaries !!!!. Our mind is sick..I got angry ... and I hid my anger … because I have a message to deliver.

I had prepared a written speech, but my cousin's words made me improvise, and I did not feel the time until the conference moderator alerted me that I had spent an hour talking … I hope I have not bored the journalists...