Please do not ask me to be silent. Allow me to breathe (24) 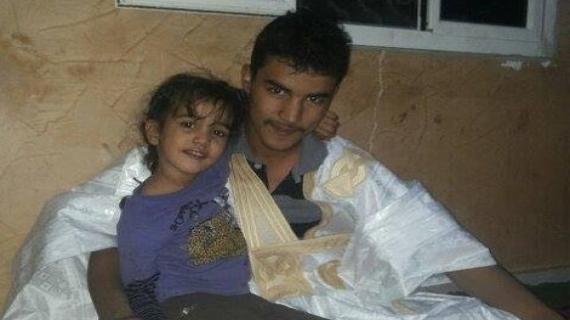 On the evening of November 29, the car carrying me hid between four mountains on the border with Mauritania, other cars were guarding the entrances to the area.

At sunrise, the area was filled with Land Cruiser cars, each contained a number of young men in full military gear with new uniforms, as if the front wanted to show its strength.

Then another Front military vehicle came and they took out a table which they placed between the mountains, with a white cloth on and four chairs.

I was sitting with two guards not far away, watching the final act of a play that has been going on for 70 days.

After a while, a unit of the Mauritanian army arrived accompanied by two white cars holding the UN flag and UNHCR badges. They began to check the position of the table using a locator device, before sitting across from each other, as if they were to enter into formal negotiations.

The scene was closer to comedy.. a table, chairs and delegations in the middle of nowhere!!!!

After about an hour, I was summoned to the table and asked by one of the UNHCR delegation companions if I would accept to come with them of my free will !!! I laughed at his question and said: Can you name the address of this place? Can you count how many military vehicles and soldiers are around us? It was really an extraordinary rally for the front that day. Then I told him if you have what I just asked you on record, then yes, I accept to go with you and it does not matter whether it was of my free will or not, as the circumstances render the question unnecessary.

I moved to the other side of the table where the UNHCR delegation was seated. I was finally free, after I said goodbye to my guards and forgave them for everything that had happened.

That moment ended 71 days of abduction and enforced disappearance, moving between mountains and valleys, sights of military cars, soldiers and the unknown tomorrow.

The way the transfer took place confirmed that I was in a state of abduction and not in a state of arrest. Whatever it was, it removed a heavy burden from the front, it ended my suffering and the suffering of the guards who had to stay up the nights watching me, away from their families like I was.

That experience made me hurt every time I heard about a case of abduction and remember what I went through. I was not subjected to physical torture but when you know that your fate is unknown, and you do not know where it will be taken or when your ordeal will end, and how your children and family are doing, and no one to complain to other than God, it becomes difficult.

There is a lesson I learned from my ordeal, which is that truth and honesty make you strong, and it gives you the determination to resist injustice.

I got in one of the UNHCR cars and we were escorted by cars from the Mauritanian army to the city of Fderick in northern Mauritania. From there, we turned south to the Mauritanian capital, Nouakchott, which we reached shortly after the sunset prayer. We were received by the head of the UNHCR office and representatives of the Mauritanian authorities. There I was told that the period of my stay in Mauritania will not exceed a few months, and that until I leave I must avoid the media out of respect for Mauritania's neutral stance towards the conflict. Therefore, at the time, I could not express my full acknowledgment and gratitude to all the freedom militants who kept reminding the world of my abduction from the very first moment, with their pens and throats through the media platforms, and who stood in all Moroccan cities and on various continents in the cold of winter calling for my freedom and pleading for my release. I thank them, not because they had great credit in pressuring the Polisario for my release. I thank them because they were there for my mother, who lives far away in a small tent from the Zemmour desert. She had said to those around her when she saw on television screens that Black, White, Asian, Arab, Amazigh, Christian and Muslim are all calling for the release of her son: I shall not be afraid or saddened for my son after today.

And so, 71 days after the abduction and enforced disappearance, I looked like it appears in the picture, taken on the second day in the world of freedom