Please do not ask me to be silent. Allow me to breathe (25) 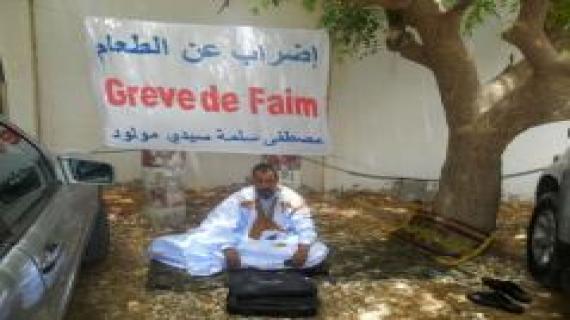 On the morning of December 1, 2010, I was summoned to the office of the High Commissioner for Refugees in Mauritania.

They brought me pictures of my kids, including a picture of my daughter, which I had never seen before .. I made the first call from their office with my mother to reassure her. It was a very difficult call, as she was holding in a worry that kept her sleepless for more than 2 months after the news about my release. She had not seen me and suspected that something might have happened to me and that the front was covering it up.

The Office of the HCR informed me of my legal status, and that the Mauritanian government graciously accepted hosting me on its territory for humanitarian reasons, because it was the only available option by virtue of its borders with the Polisario, and that I am in a "transit" situation, not a residence. This situation does not entail any rights on the Mauritanian government towards me other than the right to legal and security protection. This means I do not have the right to request a family gathering in Mauritania, nor to obtain documents such as a passport or conduct political activity.

After more than two months, the HCR offered me asylum in Finland .. I was amazed at the offer, as it is a country so far from our region and it was not among my options that I was asked about before my coming to Mauritania, on which I had no feedback yet.

After I inquired, I understood that there are those who wanted to really and truly exile me from the region. They devised a trick in collusion with influential parties in the HCR, under the pretext of pity for me, to expedite the procedures by sending my request as an exceptional case to many countries. The first positive response they received came from Finland and it was the only option I have.

Despite the malicious proposal, I accepted under the condition that it include my children, as was the prior commitment of the commission with me. But they refused, insisting that they are only responsible for my case.

Thus, my situation remained suspended between Mauritania, committed to its initial agreement with the HCR that I am just a transient, and those who had to deal with me and refuse under the pretext that they made an offer to me and did not accept it.

I wrote to international organizations, and exhausted all forms of struggle for the sake of regaining my human right to meet with my family and my right to move ... I went on a hunger strike for one and two days before I went into an open strike for 39 consecutive days. I made several sit-ins for more than six months in front of the offices of the High Commissioner for Refugees, until I was tired of struggling.

I understood that there are international parties pressing to keep my situation as it is, for my staying in neutral Mauritania, and depriving me of my right to obtain my passport, limits my disturbing activity ??? I am not a state and I have no authority over decision-makers, neither in governments nor in international organizations.

I was prevented from everything, as if I went out from a small prison to a bigger prison. Not blaming Mauritania, which housed me when I was homeless, nor its kind hospitable people among whom I do not feel like a stranger. But it was a reality bigger than me and Mauritania.

Like any other prisoner, I was not unable to find a way to fool my jailer who wants me to remain alienated and isolated from the world.. With my fingernails I carved into the high walls of the prison a window, from which I would sometimes overlook the outside world and tweet like all captive birds chanting: steadfast here I stand behind this last wall ..